Back when there were concerns of Bird Flu spreading globally, I did some research about deadly flu strains with similar symptoms. I discovered an interesting treatment that worked for the deadly flu epidemic of 1918. It's an herbal flu remedy that you can get at your local health food store, called "Lomatium". With all the talk about Swine Flu right now, I think it's worth taking a look at this interesting plant extract:

(NaturalNews) A powerful antiviral plant used by Native Americans to survive the 1918 influenza epidemic may prove to be a strong modern-day cold and flu remedy, according to a report from the University of California.

The root -- called Lomatium Dissectum, Biscuit Root or Indian Consumption Plant -- was eaten by the Washoe Indians to battle viral illnesses such as influenza. During the 1918 Spanish flu pandemic, not a single Washoe tribe member died from influenza or its complications. However, other tribes living in Nevada in areas where the plant did not grow experienced a number of deaths, according to Dr. Ernst T. Krebs, a Nevada physician writing in the Bulletin of the Nevada State Board of Health.

The plant, a member of the parsley family, is wildcrafted, and grows in dry, sandy climates. Krebs says it acts as a bronchial, intestinal and urinary antiseptic, and is also a diaphoretic (causes perspiration) and diuretic. It is usually prepared by cutting up the root and boiling it in water, then skimming off the top and consuming large doses of the broth to treat cold, flu and even pneumonia. [...]

During the Bird Flu epidemic, I had bought some Lomatium root tincture at our local health food store. I forgot how much it cost, but it wasn't expensive, it's made by a company called Herb Pharm. The companies owner, Ed Smith, has an interesting page about Lomatium on his blog:

The Use of Lomatium Root in Treating an Influenza Pandemic

[...] During the pandemic of 1918-19 over 50-million people died worldwide from what was then know as “Spanish Flu” or “La Grippe.” This was the most devastating epidemic in recorded history and infected one-fifth of the world’s population. An estimated 28% of the American population was infected and 675,000 died during the pandemic.

One herb that appears to have been very successfully used by Nevada Native Americans during this pandemic was the root of Lomatium dissectum, which at the time was named Leptotaemia dissecta. This use of Lomatium was observed by Dr. Ernest Krebs and is reported by him below. [...]

Ed gives the full text of Dr. Kreb's report. He then describes how he came to learn about Lomatium, how it's prepared and how it should be used, and a rare but possible side effect:

[...] I was first introduced to Lomatium root in 1978 by the venerable naturopathic physician, Dr. John Bastyr. He told me that for many years he would hike into the Cascade Mountains of eastern Washington to harvest the Lomatium root that he used in his medical practice.

Dr. Bastyr shared with me stories of his successful clinical use of Lomatium as an anti-viral in the treatment of colds, flu, pneumonia, and other related maladies. At the time, very few people knew of Lomatium, but Dr. Bastyr’s teachings kept knowledge of this herb alive among naturopathic doctors and medical students, and I and a few other herbalists (e.g., Michael Moore) spread the word to our herb students, patients and customers. Today Lomatium is well know among American naturopathic doctors and clinical herbalists and is available in many natural foods and herb stores.

Lomatium is a reasonably safe herb to use internally but it can rarely cause a troublesome side effect. Patients who take large or long-continued doses of Lomatium can sometimes develop an annoying skin rash. [...]

Read the whole thing for further details. I've used the product with no problems. I seldom get colds or coughs, but I consider my bottle of Lomatium root tincture a handy thing to have, just in case. 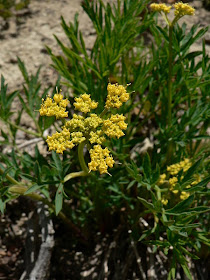