Those are words from a song. We are going to have a blue moon tonight. 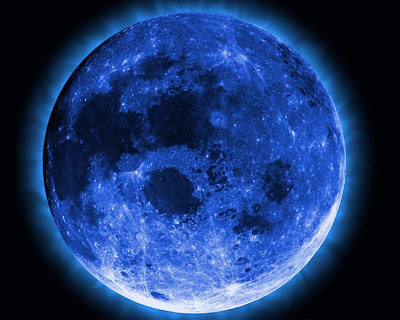 But of course, it won't actually be blue:

If skies are clear, blue moon will light up New Year's Eve

A blue moon will be upon us tonight.

Astronomers and astrologers disagree on a blue moon's significance, but they agree it's rare for one to rise on New Year's Eve.

Once in a blue moon, as the saying goes.

"Astrology aside, there is the system of understanding that this is the last day of the year," said Cynthia Killion, a Wichita psychic and astrologer.

Combined with a blue moon, "it is a very loaded, energetically intense and powerful time. It gives people extra power in making resolutions and change."

During the midst of the Great Depression in 1934, Richard Rodgers and Lorenz Hart wrote this song:

Without a dream in my heart,

Without a love of my own.

Blue moon, you knew just what I was there for,

You heard me saying a prayer for

Someone I really could care for."

Tonight, look up in the sky and see the latest blue moon. And take from it what you will.

"This moon puts a lot of pressure on us to make change," Killion said. "It is a not-so-gentle push from the universe telling us to get off our butts and change.

"The blue moon is considered somewhat of a blessing, like a doorway might be opened for miracles."

"And when I looked the moon had turned to gold.

Without a dream in my heart, without a love of my own

Without a love of my own."

Blessings? Miracles? Sounds good to me, we could all use some. Make of it what you will.