Wind Power from... the Jet Stream? 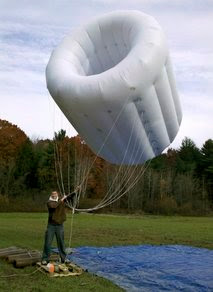 Many believe it's possible, and even more viable than land based turbines:

Companies look for power way, way up in the sky

BOSTON – The world's strongest winds race high in the sky, but that doesn't mean they're out of reach as a potentially potent energy source.

Flying, swooping and floating turbines are being developed to turn high-altitude winds into electricity.

The challenges are huge, but the potential is immense. Scientists estimate the energy in the jet streams is 100 times the amount of power used worldwide annually.

Cristina Archer, an atmospheric scientist at the California State University in Chico, said there's "not a doubt anymore" that high-altitude winds will be tapped for power.

The question is, when? Some companies project their technology will hit the market by the middle of the decade, but Fort Felker at the National Renewable Energy Laboratory says the industry is 10 years away from making a meaningful contribution to the nation's electricity demands.

The lure of high-altitude wind is simple: Wind speed generally increases with its height above the ground as surface friction diminishes. Each time wind speed doubles, the amount of energy it theoretically holds multiplies by eight times.

The world's most powerful winds circulate in the jet streams, which are found four to 10 miles off the ground and carry winds that regularly break 100 miles per hour.

The dream is to eventually tap the jet streams, but high-altitude wind companies are focusing for now below a 2,000-foot ceiling, above which complex federal air-space restrictions kick in. Adam Rein, co-founder of the Boston company Altaeros Energies, said his company calculates winds at the 2,000 foot level are up to 2 1/2 times stronger than winds that can be reached by a typical 350-foot land turbine.

High-altitude wind advocates say their smaller, lightweight turbines will be far cheaper to build and deploy than windmills with huge blades and towers that must be drilled into land or the sea floor.

"They are projecting crazy numbers," Archer said. "I'm not saying that it's true. ... But it's really the lowest, the cheapest energy source, possibly." [...]

It goes on to point out some of the obstacles that need to be overcome, but many believe it's doable and practical. Clean and cheap energy for our Brave New World.