The real-life family from "The Impossible"

It's their family's true story, that the movie "The Impossible" is based on: 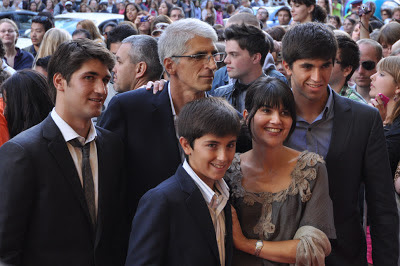 
It seemed like the perfect Christmas break for the Spanish family of five.

But then the splashing and laughter were drowned out by a deafening roar and Maria watched in horror as a towering wave pushed in from the sea and ripped through the hotel.

The family’s Far Eastern holiday over Christmas 2004 had ended in disaster — caught up in the Boxing Day tsunami which killed around 240,000 people in 14 countries.

Recalling the moment the tsunami struck, Maria, a doctor, says: “The wave is big on the cinema screen but in real life it was so much more. It was everything.”

In an instant, she found herself separated from Lucas, husband Quique and younger sons Tomas, eight, and five-year-old Simon.

The wave smashed her against a plate glass window which exploded behind her and she was swept through the hotel.

She says: “I remember being pushed against walls. You could feel them trembling and breaking, feeling them as they gave way, one after another.

“Some of the walls did not collapse — that’s why people died. They were trapped.

“I was under the water for a long, long time. I was not in physical pain but the drowning sensation was like being in a spin-dryer.

“The doctors said I was underwater for more than three minutes because my lungs were absolutely full of water. I saw many lights under the water, tunnels with lights at the end, that people tell you they see when they are going to die.”

Like Lucas and Maria, Quique doesn’t know how long he was underwater.

He says: “I thought, ‘That’s it, I’m not going to make it.’ But I needed to try. I saw a light above me, so I tried to push myself up and get my head out of the water.”

He surfaced in the torrent, more than half a mile downstream from the hotel, and says: “The only thing I could see was water and the tops of the trees. I was alone.

“I thought there was no way my children had made it. I started to cry and then I thought, ‘Why are you crying when there is no one to comfort you?’”

Quique managed to grab hold of a tree and thinks he hung on for about half an hour as the raging waters roared past him.

Another good interview is here: 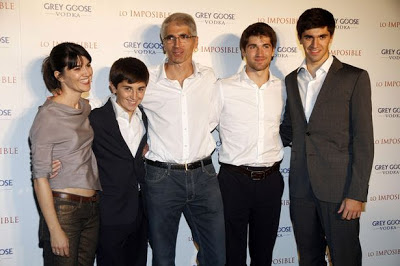 
[...] “We started to hear a very horrible sound. I was looking around thinking maybe this is just in my mind.

"No one recognised the sound. It felt like the Earth was coming apart but everything looked perfect.

“I was facing the sea and saw a huge black wall. I didn’t think it was the sea. I thought it was a black wall coming to get us.

“The two youngest boys were in the swimming pool with my husband.

"Lucas, the eldest, was just in front of me. He had just got out of the pool to fetch the ball we had bought them on Christmas Day.

"I screamed to my husband and to the kids. I thought it was the end for all of us. Lucas was crying out, ‘Mama, Mama’.

"Then they all disappeared under water. [...]

Based on the details in these interviews, it seems the movie re-enacted their experiences very closely. Follow the links for more details, and lots of photos.