"Who the heck was Anne Hutchinson?"

A well known New Age guru has released a novel called "God". I was reading the blurb from the back of the book, part of which said this:


[...] Job in the Old Testament experienced something completely different from Paul in the New Testament, Socrates chased a mercurial spirit almost unrecognizable to the strange voice that called to Rumi, and Shankara moved from town to town sharing the truth about a God that stood in marked contrast to the one that guided Anne Hutchinson—yet one sees an undeniable pattern. These visionaries took the human race down unknown roads, and Chopra invites us to revisit their destinations. Tearing at our hearts and uplifting our souls, God leads us to a profound and life-altering understanding about the nature of belief, the power of faith, and the spirit that resides within us all. [...]

I had heard of most of those names before, but I thought, "Who the heck was Anne Hutchinson? And why is she listed with those others?" I googled her name and found her Wikipedia page. It's really quite a story. I was a bit embarrassed that I didn't know, being a New Englander myself:


[...] Anne Hutchinson, born Anne Marbury (1591–1643), was a Puritan spiritual adviser, mother of 15, and important participant in the Antinomian Controversy that shook the infant Massachusetts Bay Colony from 1636 to 1638. Her strong religious convictions were at odds with the established Puritan clergy in the Boston area, and her popularity and charisma helped create a theological schism that threatened to destroy the Puritans' religious experiment in New England. She was eventually tried and convicted, then banished from the colony with many of her supporters.

Born in Alford, Lincolnshire, England, Anne was the daughter of Francis Marbury, an Anglican minister and school teacher who gave her a far better education than most other girls received. She lived in London as a young adult, and married there an old friend from home, William Hutchinson. The couple moved back to Alford, where they began following the dynamic preacher named John Cotton in the nearby major port of Boston, Lincolnshire. After Cotton was compelled to emigrate in 1633, the Hutchinsons followed a year later with their 11 children, and soon became well established in the growing settlement of Boston in New England. Anne was a midwife, and very helpful to those needing her assistance, as well as forthcoming with her personal religious understandings. Soon she was hosting women at her house weekly, providing commentary on recent sermons. These meetings became so popular that she began offering meetings for men as well, including the young governor of the colony, Henry Vane.

As a follower of Cotton, she espoused a "covenant of grace," while accusing all of the local ministers (except for Cotton and her husband's brother-in-law, John Wheelwright) of preaching a "covenant of works." Following complaints of many ministers about the opinions coming from Hutchinson and her allies, the situation erupted into what is commonly called the Antinomian Controversy, resulting in her 1637 trial, conviction, and banishment from the colony. This was followed by a March 1638 church trial in which she was excommunicated. With encouragement from Providence founder Roger Williams, Hutchinson and many of her supporters established the settlement of Portsmouth in what became the Colony of Rhode Island and Providence Plantations. After her husband's death a few years later, threats of Massachusetts taking over Rhode Island compelled Hutchinson to move totally outside the reach of Boston, into the lands of the Dutch. She settled with her younger children near an ancient landmark called Split Rock in what later became The Bronx in New York City. Tensions with the native Siwanoy were high at the time. In August 1643, Hutchinson and all but one of the 16 members of her household were massacred during an attack. The only survivor was her nine-year old daughter, Susanna, who was taken captive.

Hutchinson is a key figure in the development of religious freedom in England's American colonies and the history of women in ministry. She challenged the authority of the ministers, exposing the subordination of women in the culture of colonial Massachusetts. She is honoured by Massachusetts with a State House monument calling her a "courageous exponent of civil liberty and religious toleration." She has been called the most famous, or infamous, English woman in colonial American history. [...]

If you follow the wiki link, there's lots more information, and embedded links too. The details of her trial were chilling. Her descendants included three U.S. presidents, and, well, read the whole thing, if you enjoy history. 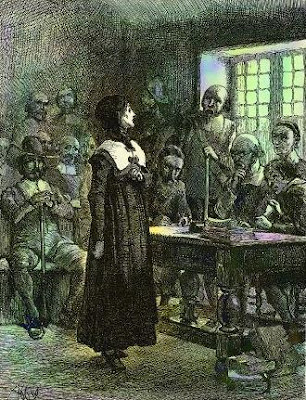