What happens when vaccinations stop?

The green is Whooping Cough, the red is Measls: 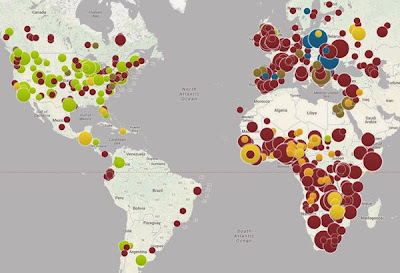 The toll of the anti-vaccination movement, in one devastating graphic


[...] A couple of manifestations stand out. One is the prevalence of measles in Europe -- especially Britain -- and the U.S. Measles is endemic in the underdeveloped world because of the unavailability of the MMR (measles, mumps and rubella) vaccine.

But in the developed world it's an artifact of the anti-vaccination movement, which has associated the vaccine with autism. That connection, promoted by the discredited British physician Andrew Wakefield and the starlet Jenny McCarthy, has been thoroughly debunked. But its effects live on, as the map shows.

Vaccine panic also plays a role in the shocking incidence in the U.S. of whooping cough, also beatable by a common vaccine. Researchers have pointed to the effect of "non-medical exemptions" from legally required whooping cough immunizations -- those premised on personal beliefs rather than medical reasons -- as a factor in a 2010 outbreak of whooping cough in California.

These manifestations underscore the folly and irresponsibility of giving credence to anti-vaccination fanatics, as Katie Couric did on her network daytime TV show in December. We examined the ethics of that ratings stunt here and here.

Among other worthwhile examinations of the impact of the anti-vaxxers, see this piece about growing up unvaccinated in Great Britain in the 1970s, and this disturbing piece by Julia Ioffe about her battle with whooping cough, a disease no American should have. [...]

The original article has embedded links.


State health officials in New York recently reported 16 cases of Measles in northern Manhattan and the Bronx, and others say the Measles are becoming a coast-to-coast problem. The New York City outbreak consists of 7 adults and 9 children, and while 2 of the children were too young for the immunization, 2 others were children whose parents refused to get them their shots. Massachusetts, Rhode Island and Pennsylvania have also witnessed a Measles outbreak in recent weeks.

Measles is a contagious illness spread through respiration. Classic symptoms of Measles include fever, cough, runny eyes or nose, and a recognizable rash. Less severe side effects of Measles include diarrhea to more serious and life-altering ones such as pneumonia, brain damage, and corneal ulceration. Risk factors for Measles are malnutrition, immun0deficiency, pregnancy and Vitamin A deficiency. In developed countries such as the U.S., children are immunized against Measles by the age of 18 months. Un-vaccinated individuals are at risk of contracting Measles. [...]

But what about the nine adults? Had they been vaccinated, and got it anyway? I got measles when I was 15, even though I had a vaccination when I was younger. I don't think it always works.