Why do Jay Carney and Claire Shipman decorate their house with Soviet propaganda posters? 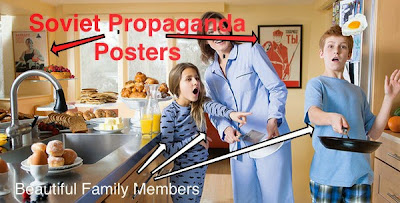 [...] Now, to be fair, both sides of the power couple studied Russian during their Ivy League educations (he: Yale, she: Columbia) and became Moscow correspondents for major news agencies (he: TIME Magazine back when it still mattered, she: CNN), where they met prior to the fall of the USSR. But the fact that they seem to be nostalgic for the communist era tells us a lot.

While life among the Moscow elite may have been fairly comfortable, it was not so for scores of millions of victims of the regime, less well-connected or ideologically heterodox. In fact, as The Black Book of Communism informs us, communism killed more people than even Nazism. With their fancy Ivy League educations, the Power Couple ought to know this.

How many foreign correspondents in Berlin in the 1930s (people like William L. Shirer) brought home Nazi propaganda posters and raised their children among them?

The sad fact is that progressives in much of the developed world have a soft spot in their hearts for communism. Yeah, it murdered a hundred million people or more, but you can’t make an omelet without breaking a few eggs. And those who were murdered were not very fashionable, for the most part.

The Washingtonian photo is a tell. There is a sickness, a willful blindness toward the crimes of communism because it is so close to the progressive ideology that animates the American Ruling Class. Shipman and Carney are the perfect exemplars of that class. Smart, fit, busy, anxious to make their own lives perfect, and convinced that the price other people pay for their progressive dreams is not worth mentioning or even noticing.

Read the whole thing for embedded links and photos. One of my favorites is the severed finger on the bookcase.

The original article is meant to be a glossy puff-piece, and the photos are supposed to be light-hearted and jokey, which is why they are so fake, I guess. Yet it illustrates something I've said before, that the political class lives in another world from most Americans, totally out of touch with the realities most Americans are facing, and are looking out for themselves, not us.