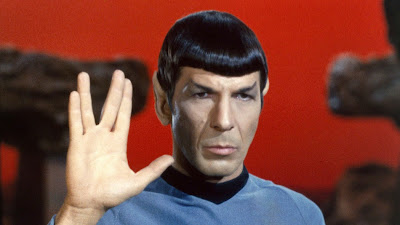 Leonard Nimoy, the sonorous, gaunt-faced actor who won a worshipful global following as Mr. Spock, the resolutely logical human-alien first officer of the Starship Enterprise in the television and movie juggernaut “Star Trek,” died on Friday morning at his home in the Bel Air section of Los Angeles. He was 83.

Mr. Nimoy announced that he had the disease last year, attributing it to years of smoking, a habit he had given up three decades earlier. He had been hospitalized earlier in the week.

His artistic pursuits — poetry, photography and music in addition to acting — ranged far beyond the United Federation of Planets, but it was as Mr. Spock that Mr. Nimoy became a folk hero, bringing to life one of the most indelible characters of the last half century: a cerebral, unflappable, pointy-eared Vulcan with a signature salute and blessing: “Live long and prosper” (from the Vulcan “Dif-tor heh smusma”). [...]

He was a man of many talents. He had a Master's degree in Spanish that he earned in his 40's, among many other accomplishments. Follow the link for photos, video and more.