Google's Redesign of it's Headquarters 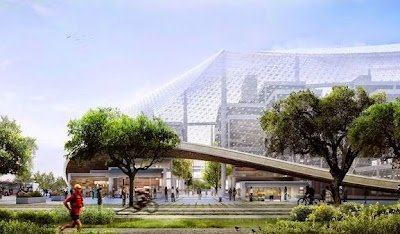 
Google has revealed eye-popping ideas for a redesign of its California headquarters that symbolize how far the company wants to move beyond its core search business.

Plans submitted Friday to the Mountain View City Council include lightweight block-like structures—not stationary concrete buildings—that can be moved around as the company invests in new product areas. These areas now include self-driving cars, solar-powered drones and robots. Google’s self-driving car team, for instance, has different needs than search engineers, the company said in revealing its plans.

On top of those modular structures would be translucent canopies that can control the climate inside while letting in natural light and air. The canopies would free the spaces from traditional limitations like walls, windows and roofs.

It’s not hard to imagine Google’s future campus serving as a playground for the company’s pursuits outside of search. Plus, it sounds like Google is going for something like a futuristic city for its thousands of employees and local residents. The company is already known for its on-campus perks encouraging employees to maximize their time on campus, but the new plans elevate that concept. [...]

Read the whole thing for more pictures, and embedded links. It's way cool! A very futuristic vision to be sure. Bold and ambitious. It will be interesting to see how the end product turns out, and how much it adheres to this vision.