A volcano may be erupting off the Oregon coast, scientists say 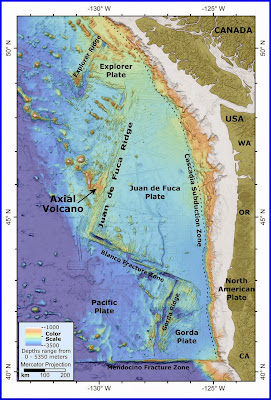 Three hundred miles off the Pacific Northwest coast, the seafloor has been rumbling.

Over the past five months, there were hundreds of small earthquakes on most days at Axial Seamount.

Then on April 24, there was a spike: nearly 8,000 earthquakes. The seafloor level dropped more than two meters. Temperatures rose.

An eruption is not a threat to coastal residents, researchers say, because the earthquakes are small, mostly magnitude 1 or 2, and the seafloor movements are relatively gradual, so they won't cause a tsunami.

The volcanic activity has no relationship to the Cascadia Subduction Zone, which scientists watch closely for signs of a much larger and more destructive earthquake.

To Bill Chadwick, an Oregon State University geologist, the eruption at Axial Seamount was not a surprise.

He had predicted it would happen this year. He predicted the previous eruption, in 2011, too.

Chadwick hopes the lessons he and his collaborator, Scott Nooner at the University of North Carolina Wilmington, learn from Axial Seamount can eventually be applied to volcanoes on land.

Land volcanoes have thicker crusts and are influenced by large earthquakes and other nearby volcanoes, among other things, so predictions are more difficult, Chadwick said.

"Axial Seamount is a pure example, if you will," he said. "It has relatively simple plumbing."

Chadwick and other scientists watch the signals at Axial Seamount in real-time via a cable laid out on the seafloor. The cable is part of the Ocean Observatories Initiative funded by the National Science Foundation. [...]

I doubt that it has nothing to do with the Cascadia Subduction Zone, since it is practically right on top of it. I presume they mean to say, that the volcano isn't signaling an imminent earthquake. As far as they can tell.

Read the whole thing for embedded links, photos and more.