Nations within Nations. Is it true? 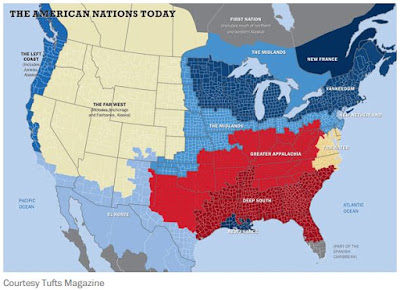 Which of the 11 American nations do you live in?


Red states and blue states? Flyover country and the coasts? How simplistic. Colin Woodard, a reporter at the Portland Press Herald and author of several books, says North America can be broken neatly into 11 separate nation-states, where dominant cultures explain our voting behaviors and attitudes toward everything from social issues to the role of government.

“The borders of my eleven American nations are reflected in many different types of maps — including maps showing the distribution of linguistic dialects, the spread of cultural artifacts, the prevalence of different religious denominations, and the county-by-county breakdown of voting in virtually every hotly contested presidential race in our history,” Woodard writes in the Fall 2013 issue of Tufts University’s alumni magazine. “Our continent’s famed mobility has been reinforcing, not dissolving, regional differences, as people increasingly sort themselves into like-minded communities.” [...]

See the whole article for a larger map, embedded links, and descriptions of each of the individual "nations" on the map.

This reminds me a lot of a similar map I blogged about in 2007. The older map broke up areas into even smaller areas. So which is better? Have things changed much? Or is it just a matter of perspective?