The S.S. United States: can she be saved?

Friends of the S.S. United States Send Out a Last S.O.S. 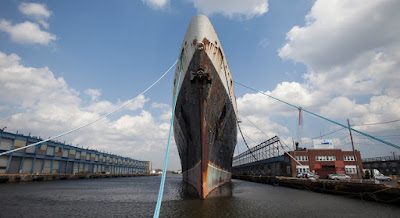 A Titanic-sized supership that once ferried presidents, Hollywood royalty, actual royalty and even the Mona Lisa has a place in the history books as the fastest oceanliner in the world. The owners are now racing to avoid having the ship, the S.S. United States, relegated to the junk heap.

A preservationist group, the S.S. United States Conservancy, saved the vessel from being scrapped a few years ago. Its members are working with a developer to give the mothballed vessel a new life as a stationary waterfront real-estate development in New York City, the ship’s home port in her heyday.

Their big dreams, however, now face a financial crisis: Short of money, the conservancy in recent days formally authorized a ship broker to explore the potential sale to a recycler. In other words, the preservationists might have to scrap their vessel.

It came down to hard numbers. The preservationists have struggled for years to raise the $60,000 a month it costs to dock and maintain the ship, known as the Big U, which is longer than three football fields and once sailed the Atlantic with three orchestras on board. A developer only recently started shaping plans to fill the ship with tenants, an undertaking of the kind that can stretch for years even when it is not this unusual. 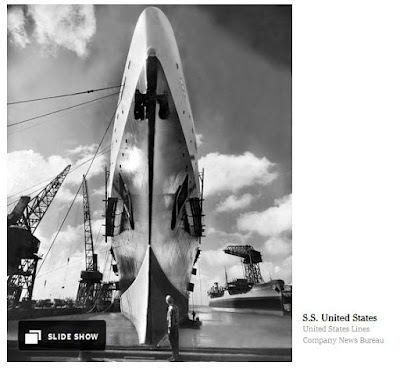 “The project is not cookie-cutter,” said Susan Gibbs, the conservancy’s executive director. “This has complicated our efforts.”

The conservancy continues to seek out donors, investors or a buyer to preserve the ship and press forward with development. But unless something happens by Oct. 31, the group said in a statement, “We will have no choice but to negotiate the sale of the ship to a responsible recycler.”

Her connection is personal. Ms. Gibbs’s grandfather William Francis Gibbs, a giant of 20th century naval architecture, designed the ship and considered it his masterwork. [...]

I remember visiting the Queen Mary Cruise Ship in Long Beach California, where it is permanently moored as a floating tourist attraction, with a hotel, restaurants, convention center, museum and more. It was very enjoyable and a memorable experience. Could not the same be done for the S.S. United States, before it disappears forever? I wish for it this: 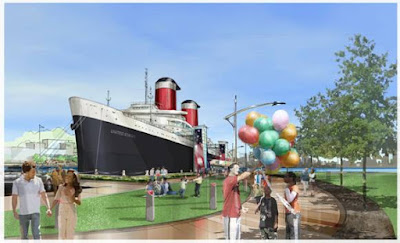 It's an artist's rendition, but with the right investors, it could become a reality. Will it, before time runs out? Such a rich piece of history, let's not throw it away when it could be recycled in a productive, useful new way, and provide enjoyment for generations to come.

Save the S.S. United States from the scrap-heap