Buy your own portable island...

And a submersible yacht to go with it: 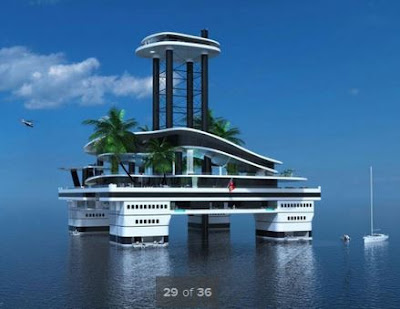 This man-made private island has a penthouse, helipad, and shark-feeding station


For about $40,000, you can purchase a private island in Maine. Of course, barring any natural phenomenon, you and your piece of land will remain residents of the Pine Tree State, because islands are pretty stationary … unless they’re man-made and mobile.

Submarine company Migaloo will custom-make you a private island with ridiculous amenities. Named the Kokomo Ailand (presumably after the island in Maui), the island is moveable, but forget about getting there fast and then taking it slow; the Kokomo only reaches speeds of eight knots (roughly nine miles per hour).

At 384 feet long and with a penthouse 262 feet above sea level, it’s no wonder you don’t want to zip around like a speedboat. The island is really customizable, and the features owners decide upon will determine its price, Christian Gumpold, Migaloo’s managing director, tells Huffington Post. Some of the add-ons include pools, decks, spas, helipad, waterfalls, outdoor movie theater, and a shark-feeding station. [...]

It's a pretty cool concept. I say concept, because I don't see and pictures of an actual one. The price tag and maintenance costs must be... well, certainly beyond my budget! And I have to say, the idea of "shark feeding stations" sounds a bit disturbing. I mean, WHAT do you feed them? Homeless people? The unemployed? I've heard that the rich are different, but, really... it sounds like a plot for a horror movie.

Follow the link for more pictures and videos, of the "Island" and the submarine/yacht. And embedded links and more info. It is cool. And the shark feeding stations are an optional feature. ;-)