It's My Party and I'll Cry If I Want To

And I think I wanna. The title of this song by Lesley Gore could easily be the motto for both Republicans and Democrats in this election. What a choice. The Devil or the Deep Blue Sea. I will refrain from saying who is which. ;-)

I stopped voting when I lived in San Francisco, because I eventually realised after 20+ years of voting that no matter who I voted for, the Democrat Parties choice for candidate would get in. Every time. So it didn't really matter if I voted or not. I'm feeling the same way about this election. Also, look at this photo of the USA from space at night: 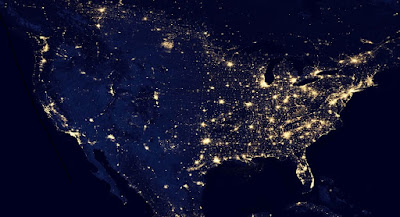 Clearly, the majority of the people in the USA live in the Eastern half of the country. They are also in an earlier time zone. I predict that, like every other presidential election I've seen since living on the West coast, they will be announcing the winner hours before the polls have even closed in the West. Causing many voters in the West not to bother to vote. THEY, the Eastern half, choose the president.

I also predict that Hillary will win, because... the "choice" has been made for us. The "election" is just a side show distraction, to keep us busy thinking we actually have a voice in what happens.  I'm sorry if that sounds cynical, but I've been around for 50+ years.  I call it like I see it.

I'll have to eat crow if I'm wrong, but I doubt I will be. I don't know by how big a margin Hillary will win by, but I predict the media will call it a "Landslide", regardless. Anyway, we shall see. Meanwhile, the dissatisfied in both Parties have their motto. Thank you Ms Gore.

It is what it is. And we will have to live with it. For better or worse.