When I bought my DV movie camera, I had high hopes of making short videos about life on the farm, and putting them on my blog. It hasn't worked out too well, for a variety of reasons. 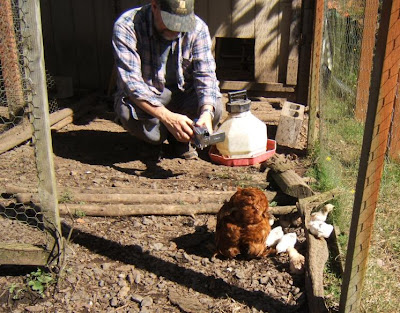 My Brilliant Career as a Chickenblogger - NOT
Mostly, it's been too time consuming. I have to film the footage, transfer it to the computers hard drive, edit it, then save it in a format that can be uploaded to the blog or to Youtube.

It's the last step that has proven to be the most frustrating. I can save it to a format that looks good, but then I can't upload it because... I'm not sure why. All the formats I've been able to use to upload to blogger or to Youtube are of inferior quality. If I try to upload the better quality ones I get "error" messages. This one below is the best I've been able to manage for Youtube:


It's not absolutely awful, but I'm not satisfied with the quality. If it isn't excellent, then I can't be bothered with it, it seems like a lot of work for nothing.

The other problem is, the subject matter itself. This video was taken in October. While I was waiting to find the time to transfer and edit the video, the chicks continued to grow very fast. And "things" happened. Two of the female chicks drowned in the duckpond. One of the male chicks hurt his leg, and had to be... "harvested" (turned into dog food).

So six of the chicks have survived, and are almost grown up now. Two are hens, and four are roosters. Three of the four roosters are most likely destined to become dog food, because we can't keep a lot of roosters. Not the happiest ending to the story. And video wise, I haven't been able to keep up with the story, and I'm not sure I even want to.

It looks like my career as a chickenblogger has ended before it's begun.

I didn't get to any reports for the past three months, so here they are now.


I'm using the term "pullet" loosely, because most of our full sized hens are no longer young. At the height of Winter, we usually don't get any eggs, but this year has been different. Our youngest full-sized chicken is an Orpington, which are known for laying eggs all year-round. And the Bantams that are laying eggs now are the Bantam-Cochin hybrid hens. I would like to cross breed them with the Orpington. The hybrid roosters fancy her, so we will see how that goes.

Here is a pic of the hybrid family while they were still living in the nursery: 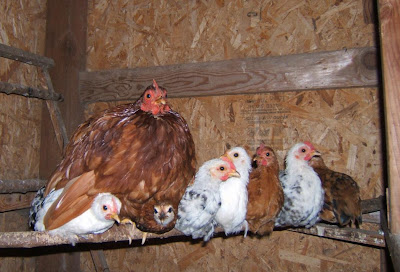 The two baby hens are sitting under their mother. The photo was taken at the end of October; they are all much bigger now, nearly full grown. I was going to move them out the nursery at Christmas, by removing the perch so they would have to join the rest of the general population. But before I could do that, their mom did it. She just went and sat with the rest of the birds, and her children followed her. She's been using the babies to climb the social ladder in the coup, literally. She is trying to force her way to the top perch, but their has been resistance from the pecking order.

The two girls still stick close to their mother, but the boys have become much more independent. A bit like juvenile delinquents. Typical roosters.

In other coup news... you may remember the hen called Freezerburn, a brown hybrid hen from the first batch, with a white face that looked like a freezerburn? Well she had her first molt this year, and when she did all her face feathers grew in brown instead of white, and now she is a much sought after "babe": 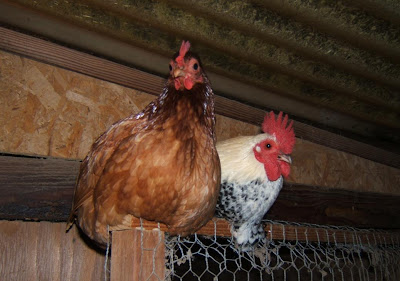 In fact, she and the Alpha rooster in the coup have become an "item"; they often hang out together, and he looks after her as one of his favorites. At last, some happy news in the coup. They are hand-tamed, and two of my favorites. I'm hoping they make some babies in the spring.

Your blog is so excellent. I am your regular reader of your blog.

Hey i am interesting in adding your http://chasblogspot.blogspot.com/ in my blog http://spacestation-shuttle.blogspot.com/

I have added your blog in my blog in right side bar links.

Will you add my blog in your blog list

Thanks for the praise. I've added a link to your blog in my right sidebar.

When I visited your blog, I noticed that you have some videos posted, and while the page was trying to load, they all began to play at the same time. It sounded confusing, and it slowed down your page from loading.

You may want to consider changing it so that the videos do not begin to play until someone clicks on the "play" button.

I like Space blogs, I look forward to seeing more of yours.