Napolitano should step down ... now 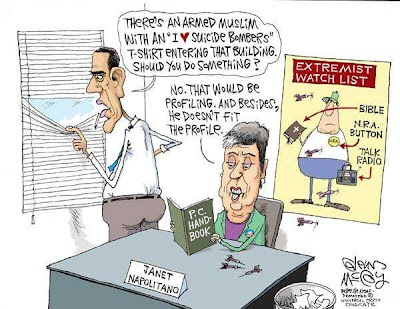 From Neal Boortz: THE REPORT

[...] After much delay, Barack Obama finally made his speech on the crotch bomber and the failure of our intelligence community to stop him from boarding a plane to the United States. If you would like to read the report in its entirety, you can click here. After reading the report, it seems to boil down to this: We had the intelligence, but we got lazy. Or comfortable. Whatever adjective you want to use, the fact is that we had the information but no one put it together.

Actually ... I really think Obama has paid heed to his wakeup call. He's serious about this. Health care is one thing .. but negligently allowing a terrorist attack on our soil would do much more to doom his presidency than would the failure of ObamaCare. He's not yet at the point where he's willing to abandon a lot of the political correctness that goes hand-in-hand with our anti-terrorism efforts (at least not in the open) but hopefully that will come.

Are you upset that no heads rolled yesterday? Yeah .. me too. But in retrospect maybe it is a good idea to concentrate on the mission right now and deal with those not mission-capable down the road. Just bypass them for the time being. My guess is that Napolitano's influence as Homeland Security Director is quite a bit less than it was .. and that she's brushing up her resume as we speak.

You did hear what she said yesterday, didn't you? She said that she was really surprised by the dedication of these Islamic terrorists .. and then she indicated her surprise that they were using individual operatives in their efforts to kill non-believers. Come on now. That guy in the dump truck who cut you off this morning knew this ... and our Homeland Security Director is surprised?

This particularly Obama appointment could cost American lives. She needs to go .. as soon as possible.

Bold emphasis mine. I have to agree. The more Napolitano speaks, the more incompetent she sounds. Keeping her there will only make things worse.