Lifespan of Dollars is longer in Zimbabwe 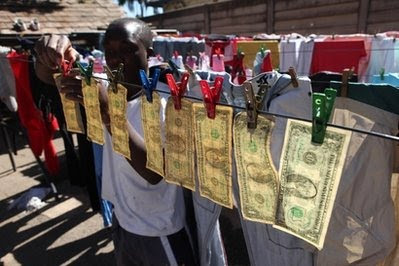 HARARE, Zimbabwe – The washing machine cycle takes about 45 minutes — and George Washington comes out much cleaner in the Zimbabwe-style laundering of dirty money.

Low-denomination U.S bank notes change hands until they fall apart here in Africa, and the bills are routinely carried in underwear and shoes through crime-ridden slums.

Some have become almost too smelly to handle, so Zimbabweans have taken to putting their $1 bills through the spin cycle and hanging them up to dry with clothes pins alongside sheets and items of clothing.

It's the best solution — apart from rubber gloves or disinfectant wipes — in a continent where the U.S. dollar has long been the currency of choice and where the lifespan of a dollar far exceeds what the U.S. Federal Reserve intends.

The U.S. Federal Reserve destroys about 7,000 tons of worn-out money every year. It says the average $1 bill circulates in the United States for about 20 months — nowhere near its African life span of many years. [...]

Unlike here, they can't take worn notes to the bank and exchange them. Chemical cleaning fades the color, so they gently launder the bills.