A WWII story of a brave and unusual escape 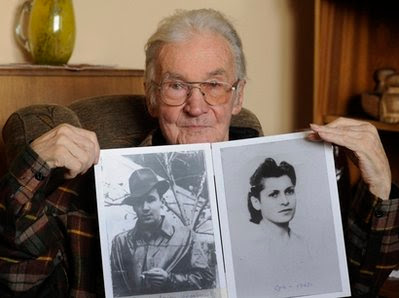 NOWY TARG, Poland – With every step toward the gate, Jerzy Bielecki was certain he would be shot.

The day was July 21, 1944. Bielecki was walking in broad daylight down a pathway at Auschwitz, wearing a stolen SS uniform with his Jewish sweetheart Cyla Cybulska by his side.

His knees buckling with fear, he tried to keep a stern bearing on the long stretch of gravel to the sentry post.

The German guard frowned at his forged pass and eyed the two for a period that seemed like an eternity — then uttered the miraculous words: "Ja, danke" — yes, thank you — and let Jerzy and Cyla out of the death camp and into freedom. [...]

Read the whole story. Follow the link, and look at the photo slide show. An unusual story, with an ending that's probably not what you would expect.