Ground Zero Mosque: How close is it?

I call this too close for comfort:


Much has been written about the so-called “Ground Zero Mosque” and its proximity to where the World Trade Center towers once stood, but here’s an aereal photo that puts the location into perspective. 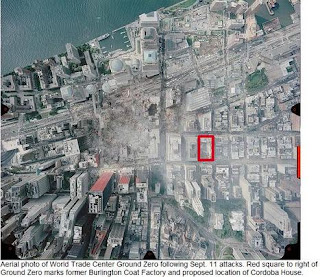 The red box is the old Burlington Coat Factory building where landing gear from one of the hijacked planes crashed through the roof, and it is the proposed site for Park51 [...]

I am against this choice of a site, for reasons previously mentioned.

President Obama is right that legally, the mosque builders have the right to build there.  And if our laws mean anything, and are to be applied to all citizens equally, then it cannot and must not be legally stopped.  If we did so, the mosque builders could rightly claim that we lie about upholding our own laws, and don't apply them equally. That must not happen; we are better than that.

However, the mosque builders themselves claim they are building this place as a bridge to promote peace and understanding.  Their insistence on doing so, in a place that causes offense to so many people, beLIES their claim.  It's being seen for what it is; arrogant, insensitive and confrontational, and meant to provoke an angry response. A "bridge" to nowhere.

The Democrat leadership is largely supporting them in this provocation, because the Democrat party has been using a divide and conquer strategy for some time now.  They divide people up into groups, and pit them against each other, then offer themselves and their growing, bloated bureaucracy as the solution to conflicts they helped foster in the first place.

If you want to put restraints on that practice, vote them out in November.

As for the mosque builders, if you disapprove of their choice of location, use your legal right to free speech and let them know about it. The more our objections fall on deaf ears, the more they look like the transparent liars that they surely are.

Beware of the practitioners of Al-Takeyya. Their words hide their true intentions. And in cases like this, their actions speak louder than their lies.

An atheist on the GZ mosque

The Mosque and Ground Zero!

The mosque - this made me think

Freedom of religion - let's make a deal with the Muzzies

The principle of al-Taqiyya