The Perseids are Peaking Now

The annual August meteor shower, that is:

Earth is entering a stream of debris from Comet Swift-Tuttle, source of the annual Perseid meteor shower. International observers are now reporting more than 20 Perseids per hour, a number that will increase as the shower reaches its peak on August 12-13. 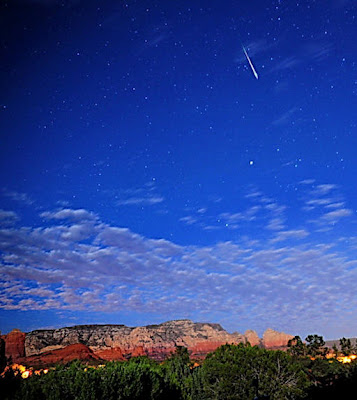 "The meteor was bright enough to be seen through the glaring moonlight that was illuminating the landscape," notes Adams. [...]


What an excellent photo! A full moon is not generally considered a good thing for watching a meteor shower, but Marsha made it work for her with this picture.

Meteor Shower 2011: How to See the Perseids