Tottenham, and Riots and Geomagnetic Storms.

I've posted before about Geomagnetic storms/solar flares and riots. Coincidentally, the recent riots in Tottenham seem to coincide with this weekends solar weather:

BIG SUNSPOT GETS BIGGER: Behemoth sunspot 1263 has almost doubled in size this weekend. A 28-hour movie from NASA's Solar Dynamics Observatory shows the spot developing a tail that has added some 50,000 km of length to the active region. This development may increase the likelihood of a strong flare. Images: #1, #2, #3

WEEKEND AURORAS: A widespread display of auroras erupted late Friday, Aug. 5th, when a double-CME hit Earth's magnetic field and sparked a G4-category geomagnetic storm. "It was the most impressive display I've seen in years," reports Lance Taylor of Edmonton, Alberta. "From 10:00 PM on Friday to 3:00 AM on Saturday, the sky was pulsing from horizon to horizon in every direction." He took this picture during the most intense phase of the storm: 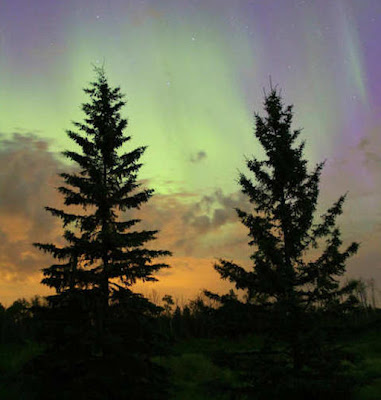 The show was not restricted to Canada. Northern Lights spilled across the border into the United States as far south as Utah, Colorado, and Nebraska. (Note: The faint red lights photographed in Nebraska are typical of low-latitude auroras during major geomagnetic storms.) Observers in Europe as far south as England, Germany and Poland also witnessed a fine display. Browse the gallery for more examples. [...]

Follow the link to the original article, which has many embedded links, and for information about the night-time solar radio burst, which has not happened since 1958.