Would you buy a used car from these guys? I wouldn't: 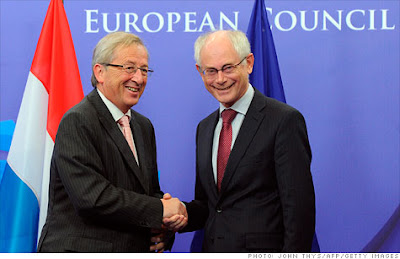 [...] As a work around, officials are reportedly considering a plan to use EFSF funds to provide loans that governments can use to partially insure new issues of domestic debt. But this would effectively add to already unsustainable levels of public debt.

"All of this is stupidity," said Columbia Business School professor David Beim. "All they can think to do is get an ever larger fund and throw it into ever worse assets."

Beim, like many economists, argues that the first step toward stabilizing the eurozone is to restructure the Greek government's debt load. All else merely delays the inevitable and perpetuates the crisis. [...]

If you read the full article, it sounds like it's all about going nowhere quickly. Re-arranging deck chairs on the Titanic. Borrowing from Peter to pay Paul.

It sure doesn't inspire confidence. I wouldn't much care what they do, except that it will have global consequences. And what might those be?