I did a post earlier about the shocking truth about the common goldfish; about how, when properly cared for, they can live for decades and grow to be a foot long, requiring enormous aquariums and frequent water changes. Too much fuss! They are more easily kept in a POND.

I wanted a SMALL, golden, coldwater fish that would stay small, to be a surrogate replacement for my desire to keep small gold fish. And I think I've found it: 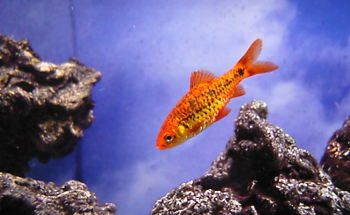 The Gold Barb is a popular fish amongst aquarium keepers. Living between four and six years they originate from the sub-tropical parts of South East Asia and is exclusively native to China, Laos and Vietnam although it has now been introduced to other countries The Bright colours of the Gold Barb and their active personality add charm to any aquarium. This coupled with their ease of care makes the Gold Barb an ideal fish for beginners and experts alike. 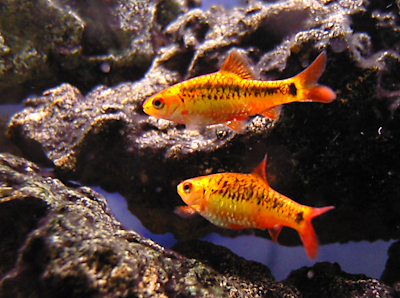 Gold Barb are shoaling fish and should ideally be kept in groups of at least six. Living up to six years in age they are docile fish that make a good addition to a community tank when paired with fish with similar personalities and care needs.

It is known by several different names, most commonly referred to in the USA as the China barb.

The Gold Barb belongs to the minnow family, and is a medium long barb. Its body has a complete lateral line and the last simple dorsal ray is serrated. It has a pair of barbels located at the corners of the mouth on the upper jaw. The female tends to be duller than the male and bulkier. During the breeding period, the male golden barb's belly will change colour to a vivid orange.

They are mid to bottom level fish and need a tank of around fifteen gallons or more to be kept happily.

They are very active fish and need plenty of open space with plenty of plants at the back and sides of the aquarium as well as a strong current to mimic their natural conditions. [...]

They aren't as much of a "cold" water fish as a true goldfish, but they can live in an unheated aquarium in a house kept at normal room temperature.

And of course, they get on with other barbs/minnows. I've never collected them before, so I'm looking forward to it.

[...] The Gold Barb, a gold colour variant of the China Barb, is an active, peaceful schooling species that spends most of its time in the mid-level and bottom of the water. Its typical lifespan in captivity is around four to six years. This peaceful green-gold fish is often used in community tanks by fish keeping hobbyists. It breeds readily in outdoor pools and free-standing ponds during summer months, and withstands cooler temperatures better than other tropical fish. However, it does not stand the cold as well as its original plainer China barb counterparts.

So there are variations, too. Goody!