Will Greece, Italy and other PIIGS sink the Euro?

For my fishtank, I got one of those Greco-Roman Ruins backgrounds. I thought perhaps, to make it contemporary, all I needed to do was add a Euro ATM machine: 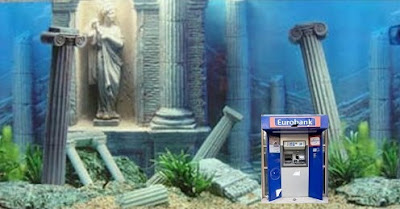 It would be ironic if Greece and Italy, from which the principles of Western Civilization sprang, turn out to be also the springboard for it's collapse and ruin.

Is it really that bad? I can't say for sure. But it does look alarming, as the Europeans seem unable to contain the problem:

Spain and France: Market says you're next!

NEW YORK (CNNMoney) -- Next up on the 2011 Europe Financial Calamity tour? Spain and France.

Yes, government bond yields in Italy are still climbing -- even after the resignation of Silvio Berlusconi. With the Italian 10-year back above 7%, it's clear that investors are still very nervous about the debt problems in Europe's boot.

But perhaps more alarming is the fact that the market is now increasingly wary of Italy's Mediterranean neighbors as well.

Yields on Spain's 10-year bond have climbed to about 6.3%. That's dangerously close to the 7% level that many investors feel could signal the need for a Spanish bailout.

And France's bonds are starting to look like French toast. With yields now around 3.67%, that puts the "pain" in pain perdu. (Yes, I watch Top Chef.)

The verdict from the experts I spoke to: Unless the European Central Bank steps up to the plate with a real plan to stop the bleeding, Europe will keep bleeding.

"The market keeps looking ahead to the next potential victim in Europe," said Jurgen Odenius, chief economist for Prudential Fixed Income in Newark, N.J. "Volatility is rising because there is no comprehensive, credible solution. It's becoming readily apparent that there's only one game in town, an ECB rescue."

Odenius said he doubts that Europe will be able to convince China and other global sovereign wealth funds to put up enough capital to increase the leverage of the European Financial Stability Facility bailout fund. That means the ECB may have to be the proverbial lender of last resort.

If the ECB does not take more bold action -- namely a strong commitment to keep buying more sovereign debt -- Odenius thinks Spanish yields may soon hit 7% like in Italy. And if that happens, France could also be in serious trouble.

"The French have problems in their banking system related to Italy, Spain and other countries. Investors are not suggesting that France is a crisis just yet, but it is murky," he said.

Michelle Gibley, senior market analyst with the Schwab Center for Financial Research in Denver, agreed. European leaders need to bust out a "bazooka" to deal with the debt crisis, she said.

But the problem facing Europe right now is that leaders haven't even acknowledged they have a big financial weapon, let alone talk about a willingness to use it.

"I am concerned that European policy makers have yet to find the bazooka," Gibley said. "The crisis is rolling from one nation to the next. The contagion has not been contained."

Eurozone teeters on edge of recession

Her biggest worry is that European governments are simply choosing to focus on austerity to deal with their fiscal problems. But while budget cuts, higher taxes and more responsible spending can help cut onerous debt loads, such actions do nothing to help stimulate their economies.

"The debt crisis is now potentially entering a dangerous cycle where austerity just reduces growth, borrowing costs continue to rise and credit ratings get downgraded. That's because nobody is addressing growth," Gibley said. "How much more turmoil does there need to be before the ECB does more?" [...]

But how much more CAN they do? Can they stimulate economic growth, sufficient enough to stay on top of their debt payments? If they don't have a bazooka, will they get one in time?

It all remains to be seen. Hopefully not on a fish tank backdrop.

Why Greece is in trouble. And a warning for us.