Solar Storm Continues on with a New Blast 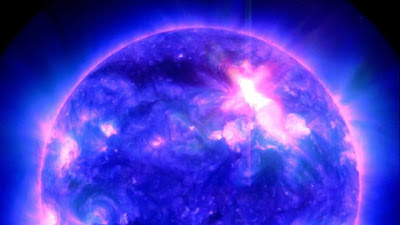 Fast on the heels of a solar storm that delivered a glancing blow over the weekend — triggering bright auroras in Canada and Scandinavia — the sun released an even more energetic blast of radiation and charged plasma overnight that could disrupt GPS signals and the electrical grid Tuesday, especially at high latitudes, space weather experts warned Monday morning.

Already, the storm could be disrupting satellite communications as streams of radiation from the sun bounce across the Earth’s magnetic field, which extends above the surface into space.

“With the radiation storm in progress now, satellite operators could be experiencing trouble, and there are probably impacts as well to high frequency [radio] communications in polar regions,” said Doug Biesecker, a physicist at the Space Weather Prediction Center, part of the National Oceanic and Atmospheric Administration in Boulder, Colo.

Such radio blackouts can force airlines to reroute flights between North America and Europe or Asia.

Biesecker said any rocket launches scheduled for Monday probably would have to be scrubbed, although he said he was unaware of any planned launches.

The solar storm is the biggest since 2005, he added.

The storm will peak Tuesday when a speeding cloud of plasma and charged particles blasts past Earth, distorting the planet’s magnetic field with impacts possibly ranging as far south in latitude as Texas and Arizona.

“We expect moderate to potentially strong geomagnetic storming that can cause pipeline corrosion effects and power grid fluctuations,” Biesecker said.

Predictions from NASA scientists show the storm peaking about 9 a.m. Tuesday, although uncertainty in the prediction means the storm could peak up to seven hours earlier or later, said Michael Hesse of NASA’s Space Weather Laboratory, at the Goddard Space Flight Center in Greenbelt.

“It’s not going to be a catastrophe, but there could be noticeable geomagnetic current induced on the electrical grid,” Hesse said. [...]

It goes on to say that this plasma cloud is heading towards earth at high speed, the fastest one so far in this solar cycle. And speed matters, because the speed at which it hits the earths magnetic field will increase it's likely affects.

[...] According to NOAA, this is the strongest solar radiation storm since May 2005, and as a precaution, polar flights on Earth are expected to be re-routed within the next few hours, Kathy Sullivan, deputy administrator of NOAA, said today at the 92nd annual American Meteorological Society meeting in New Orleans, La.

"There is little doubt that the cloud is heading in the general direction of Earth," Spaceweather.com announced in an alert. "A preliminary inspection of SOHO/STEREO imagery suggests that the CME will deliver a strong glancing blow to Earth's magnetic field on Jan. 24-25 as it sails mostly north of our planet." [...]

For updates from NOAA, check here: