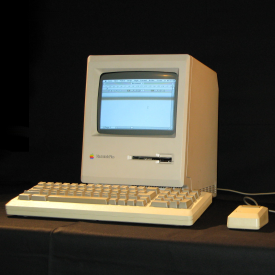 A Look Back at 30 Years of the Mac
The Apple Macintosh computer turns 30 on Friday; here's a look back at what made the Mac special and how it evolved over the past three decades.


In the early 1980s, the home computer and business PC revolutions were already in full swing. Apple set the template with the Apple II in 1977, while competitors Radio Shack, Atari, and Commodore followed suit. Meanwhile, in 1981 IBM introduced an artificially crippled, open-architecture, 16-bit machine called the IBM PC, which when combined with Lotus 1-2-3, took off in popularity in business environments large and small.

It was the Macintosh, though, that set the course for both kinds of computing for the next several decades. While Apple didn't invent the graphical user interface, with the Mac the company brought it to mainstream consumers for the first time. Microsoft and IBM immediately began copying its various idioms and design language—at first with a kind of hilarious ineptitude, and then in earnest beginning with Windows 3.0 in 1990 and OS/2 2.0 in 1992. The rest, of course, is history.

Today, the 30th anniversary of the Apple Mac is upon us. It goes without saying we wish Steve Jobs were still around to celebrate with all of us. So with a nod to him—and Steve Wozniak, who started Apple with Steve Jobs, and to everyone who worked on the original Mac and what followed, let's take a look back and see how we got to where we are today. [...]

What a different world it was back then. I was a Commodore 64 user at the time; the Mac was just too expensive. And IMO, it still is. Sure, their stuff IS nice, but I just won't pay that much for overpriced proprietary hardware. If they ever reverse-engineer their software to run on regular PC hardware, I'd consider it but I won't hold my breath waiting for that to happen.

But there is no denying the massive impact Apple had on computer operating systems, especially the graphical user interfaces they used. Apple set the standard for the PC GUI. This article is a real Blast from the Past, looking at how it all came together for the first time.