I used to work two blocks away on Montgomery Street, and I walked past this building very often. What a story. Imagine falling off of this roof: 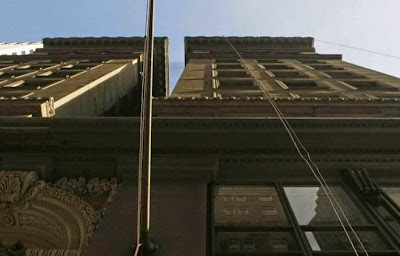 SAN FRANCISCO (KGO) -- An unbelievable accident closed off parts of California and Montgomery streets in San Francisco's Financial District Friday morning. A window washer fell from an 11th story building, landing on a moving car below. The victim survived but is in critical condition. It's hard to believe the driver of that car was not hurt.

The window washer fell from the roof and landed on a Toyota Camry. All but the driver's area was caved in. The driver, Mohammad Al Cozai, narrowly escaped being critically injured.

"As soon as I made my left turn, then I saw something hit my car very hard. The impact was really hard. I didn't know what it is," said Mohammad Al Cozai of Dublin.

After landing on the car, the window washer fell onto the street. Witnesses ran to help. [...]


[...] The driver of the car, Mohammad Alcozai of Dublin, got out almost immediately after the impact. The victim hit the roof and back window of the 2002 four-door Camry, totaling the car. A split-second difference in timing and the worker might have landed on the windshield, with potentially terrible consequences for Alcozai.

“It was a miracle,” Alcozai told The Chronicle.

A traveling tech specialist, Alcozai said he was supposed to go on a call to Walnut Creek on Friday morning, but after it was canceled he wound up in San Francisco. As he was about to turn onto California Street from Montgomery, his car’s navigation system went blank, so he slowed down.

As the system turned back on, he sped up — “and that’s when something hit my car with a terrible thump,” he said.

“With all the changes in where I went and how I was going this morning, I think God wanted me to be there just at the moment that poor man fell,” Alcozai said. “It was a miracle that he was able to fall in my car, and it was a miracle that I was OK.

Follow the links for photos and video. Yikes. It's quite miraculous that he hit it the way he did, when he did. And it looks like he's going to survive:


OAKLAND, Calif. – A window washer who fell 11 stories from a downtown San Francisco building onto a moving car last month is preparing to leave the hospital for a rehabilitation facility where he hopes to walk again.

Pedro Perez, 58, fractured his pelvis, broke an arm, ruptured an artery in his arm, and sustained severe brain trauma when he landed on the Toyota Camry after falling from the top of a bank building in San Francisco's financial district on Nov. 21. The car's driver was not injured.

Perez spent a week in a medically induced coma and still can't move his right arm and leg. But just a month after the fall, he has amazed doctors who originally said it would be months before he could leave the hospital, his wife, Maricela Perez told reporters on Monday.

"They are saying it's a miracle," she said through a translator.

Maricela Perez spoke in Spanish about her husband's recovery at his union shop in Oakland. She said he is in good spirits, complaining about the hospital food and even joking about returning to work down the line, although the couple has agreed it won't be as a window washer.

She said she thought he was dead for the first hour after she heard about the accident. At first, her husband could not recognize members of their extended family, but his memory is slowly improving, she said.

I read somewhere that he doesn't remember the accident. The shock must have been enormous. Lucky to be alive, and recovering. I wonder if one day he will remember what happened?