Watch out for the Quadrantids

If you are lucky enough to have a clear sky to see them: 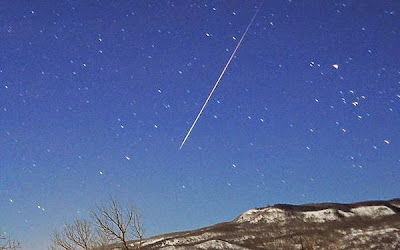 
Grab a coat and head outside: The first meteor shower of the new year is set to peak tonight.

The annual Quadrantid meteor shower is popular with star watchers, who can see up to 80 meteors an hour, NASA says. Plus, Quadrantids are known for their “fireball meteors,” which are brighter and last longer than an average meteor streak.

This year, however, a bright, near-full moon is complicating matters for those who would like to wish on a shooting star – as are forecasts of cloudy skies in the eastern United States. Central and Southwest stargazers should still have a clear view, The Washington Post reports.

The Quadrantids aren’t the only items of interest visible in the night sky this weekend. Comet Lovejoy, which was discovered in August, is visible with binoculars and, for those far away from city lights, the naked eye, the Monitor’s Pete Spotts reports. The comet, which is expected to make its closest approach to Earth on Jan. 7, is rising higher in the northern sky. By Jan. 7, it will be appearing to the right of the bottom half of Orion’s bow, above the constellation Eridanus.

“Lay flat on your back with your feet facing northeast and look up, taking in as much of the sky as possible. In less than 30 minutes in the dark, your eyes will adapt and you will begin to see meteors,” NASA says. “Be patient – the show will last until dawn, so you have plenty of time to catch a glimpse.” [...]


Looks like we'll have clouds moving in tonight, darn it. Maybe there will be some breaks in the clouds. And there will still be comet Lovejoy to look for in a few days.