Skype, with a speech translator?

Supposedly. This was announced last month: 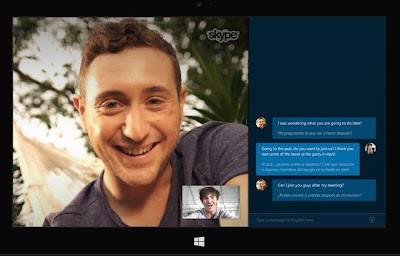 Voice over IP communication is entering a new era, one that will hopefully help break down language barriers. Or so that's the plan. Using innovations from Microsoft Research, the first phase of the Skype Translator preview program is kicking off today with two spoken languages -- Spanish and English. It will also feature over 40 instant messaging languages for Skype customers who have signed up via the Skype Translator sign-up page and are using Windows 8.1.

It also works on preview copies of Windows 10. What it does is translate voice input from someone speaking English or Spanish into text or voice. The technology relies on machine learning, so the more it gets used, the better it will be at translating audio and text.

"This is just the beginning of a journey that will transform the way we communicate with people around the world. Our long-term goal for speech translation is to translate as many languages as possible on as many platforms as possible and deliver the best Skype Translator experience on each individual platform for our more than 300 million connected users," Skype stated in a blog post.

Translations occur in "near real-time," Microsoft says. In addition, there's an on-screen transcript of your call. Given the many nuances of various languages and the pace at which communication changes, this is a pretty remarkable feat that Microsoft's attempting to pull off. There's ton of upside as well, from the business world to use in classrooms.

If you want to test it out yourself -- and Microsoft hopes you do, as it's looking for feedback at this early stage -- you can register for the program by going here.

Follow the link to the original article for embedded links, and a video.

See how it works here:

Skype Translator is the most futuristic thing I’ve ever used


We have become blasé about technology.

The modern smartphone, for example, is in so many ways a remarkable feat of engineering: computing power that not so long ago would have cost millions of dollars and filled entire rooms is now available to fit in your hand for a few hundred bucks. But smartphones are so widespread and normal that they no longer have the power to astonish us. Of course they're tremendously powerful pocket computers. So what?

This phenomenon is perhaps even more acute for those of us who work in the field in some capacity. A steady stream of new gadgets and gizmos passes across our desks, we get briefed and pitched all manner of new "cutting edge" pieces of hardware and software, and they all start to seem a little bit the same and a little bit boring.

Even news that really might be the start of something remarkable, such as HP's plans to launch a computer using memristors for both longterm and working memory and silicon photonics interconnects, is viewed with a kind of weary cynicism. Yes, it might usher in a new generation of revolutionary products. But it probably won't.

But this week I've been using the preview version of Microsoft's Skype Translator. And it's breathtaking. It's like science fiction has come to life.

The experience wasn't always easy; this is preview software, and as luck would have it, my initial attempts to use it to talk to a colleague failed due to hitherto undiscovered bugs, so in the end, I had to talk to a Microsoft-supplied consultant living in Barranquilla, Colombia. But when we got the issues ironed out and made the thing work, it was magical. This thing really works. [...]

Follow the link for more, and enlargeable photos that shows what it looks like as it's working.