Looks like it. This was Iowa from the early morning hours today: 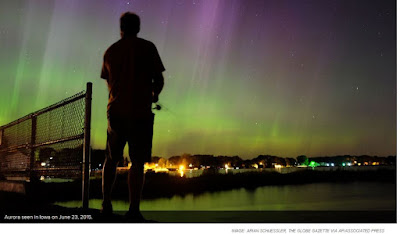 Look up! Another solar storm may supercharge auroras Wednesday


While a "severe" solar storm that sparked dazzling auroras around the world on Monday through Tuesday morning is dying down now, skywatchers shouldn't stop looking up quite yet.

Another potentially powerful solar tempest is expected to impact Earth on Wednesday into Thursday, and it could create more amazing auroras for people in the Northern and Southern Hemispheres.

In particular, the next solar storm is especially well aimed to enhancing aurora activity over North America, according to experts at the National Space Weather Prediction Center (SWPC) in Boulder, Colorado.

Monday's solar storm hit the G4 or "severe" level, a relatively rare class of storm that can create bright auroras in relatively low latitudes. Such G4 storms — the rating scale goes up to G5 — can also cause problems with power grids on Earth and harm satellites in space.

And another storm of that severe magnitude is likely on its way to Earth now.

Scientists at the SWPC are anticipating that the solar storm predicted to arrive Wednesday could, yet again, produce beautiful auroras in relatively low latitudes.

At the moment, the SWPC is predicting a G3 or "strong" storm on Wednesday and Thursday, but that was the forecast for Monday, as well. [...] 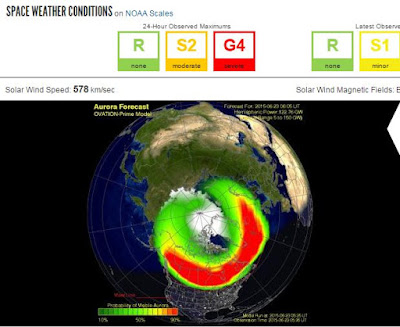