Oregon is for Losers?

This is an unpleasant statistic: 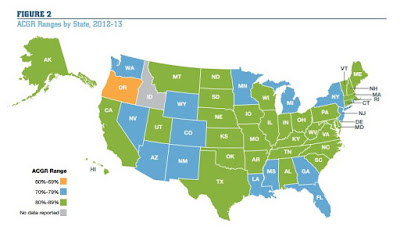 Report: Oregon has worst graduation rate in the U.S.


A comprehensive U.S. report showed that Oregon not only has the worst graduation rates in the nation, but it's holding the country back from achieving its graduation rate goals.

The 2015 Building a Grad Nation report analyzed 2013 graduation rate data from every state in the nation. While the national average reached a record high of 81.4 percent, the four-year graduation rate in Oregon was only 69 percent.

Furthermore, Oregon hadn't improved from the year before, showing stagnation as the last remaining state with graduation rates lower than 70 percent.

"Oregon did not experience significant improvements and became the state with the lowest graduation rate in the nation and the last remaining state with an ACGR [Adjusted Cohort Graduation Rate] in the 60s," the report said.

The Grad Nation report shows that overall, much of the country is on track to graduate upwards of 90 percent of seniors by 2020, and many states are already graduating more than 80 percent of students, including neighboring California. Washington State had a 76.4 percent graduation rate. [...]

Even California is doing better. What gives?