The Lockerbie bomber - Guilty or Innocent? 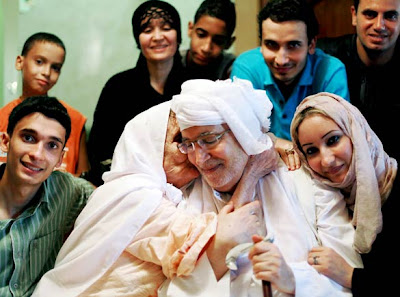 At home with the Lockerbie bomber

Is he the evil perpetrator of the deadliest terrorist attack in British history, or a sick old man, a loving father and grandfather, who has suffered a terrible miscarriage of justice? Abdul Baset Ali al-Megrahi put on a virtuoso performance when The Times came calling yesterday.

Asked who, then, was responsible for the deaths of 270 people who died in the Lockerbie bombing, al-Megriah smiled. “It’s a very good question but I’m not the right person to ask.” He insisted that it was not Libya and would not be drawn on suggestions that it was Syria, Iran or the Palestinians.

He said that he understood why many of the victims’ relatives were angry at his release. “They have hatred for me. It’s natural to behave like this,” he said, although he pointedly added that others had written to him in prison to say that they forgave him whether he was guilty or innocent. He appealed for the families’ understanding. “They believe I’m guilty which in reality I’m not. One day the truth won’t be hiding as it is now. We have an Arab saying: ‘The truth never dies’.” [...]

I can't say a lot about it, as I did not follow his trial closely when it happened. He claims to have evidence to prove his innocence. Let's hear it then.


UPDATE 09-02-09:
Did al-Megriah even have life-threatening cancer? Seems highly questionable now. Plenty of lies are being exposed.

Read it, and weep.

2 days ago I also wondered about the reality behind this over my blog. Nevertheless, I am not happy with what has happened at all!

Even though he is dying,he should not be trusted and he should still be monitored.

In the interview, they said he started to talk about politics, but the family intervened and ended the interview.

Were they hiding something? What is Megrahi's mental state like anyway? Maybe he's a bit nuts?

I suspect that he may live longer than three months, but also that he may pass on without revealing his evidence. Then the family will say "He died before he could present the evidence of his innocence." They will insist he's innocent, without proof, and it will be unresolved for those with doubts.

I'm just speculating here; I don't claim to really know what's what. It's just that, if someone says they have evidence proving their innocence, you expect them to present it. If they don't, then you have to doubt that they really have it. Claiming to have it without presenting it just seems like empty posturing.