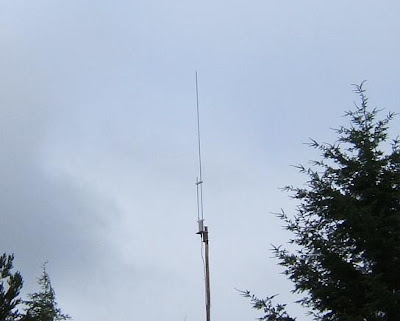 Last month, I went to a local Hamfest in town. One of the vendors there was Jpoles.com, a business that manufactures and sells Jpole antennas for use with Ham Radios that operate on 2 meters (and also for 70cm). They are "pre-tuned", and sell for $49.95. I needed an antenna for my ICOM hand held radio, the IC-V85. On the advice of a friendly Ham Operator that I met at the event, I bought one. They guarantee their JPOLE to be free from defects in material and workmanship for 10 full years; if it fails they will repair or replace it. 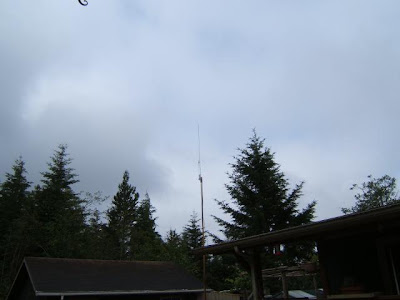 I was advised to mount it as high up as possible, so I put it outside on the top of the tallest cedar tree pole I could fit it on. I've been using the antenna now for the past month, and I've been very satisfied with it's performance. Prior to this I was using a rubber duck antenna, or my external antenna for my scanner. Neither gave me reliable performance with the IC-V85. Sometimes it would work ok, other times people had trouble hearing me, sometimes no one could hear me at all.

Since using the JPOLE antenna, I always have a strong and clear signal that get's heard every time. At the hamfest, I also bought a 30 watt amplifier and power supply, but I've not needed to use it to access our local repeaters; I seem to be fine without the extra power. I will hitch them up eventually though, so I can perhaps access repeaters that are farther away. But before I can do that, I still need to set up a proper Ham Station, with grounding, etc.

I'll get there eventually. It's turning out to be a fun hobby!

The J-pole antenna, also called the Zepp' antenna (short for Zeppelin), was first invented by the Germans for use in their lighter-than-air balloons. Trailed behind the airship, it consisted of a single element, one half wavelength long. This was later modified into the J-pole configuration, which became popular with amateur radio operators, as it is effective and relatively simple to build.

The J-pole antenna is an end-fed omnidirectional dipole antenna that is matched to the feedline by a quarter wave transmission line stub. Matching to the feed-line is achieved by sliding the connection of the feedline back and forth along the stub until a VSWR as close as possible to 1:1 is obtained. Since this is a half-wave antenna, it will exhibit gain over a quarter-wave ground-plane antenna. The J-pole is somewhat sensitive to surrounding metal objects, and should have at least a quarter wavelength of free space around it. [...]

Read the whole thing for more details and links. Many people build their own. I was tempted, but I needed something good, in a hurry. Eventually, I hope that I'll have more time to experiment with home-brew antennas.

Hi Chas, I read Patricks blog a lot and saw your post on J-poles. I've been a ham since '91 and a big fan of j-poles. I finally got the courage to build one this year and it was so easy, I ended up building 5 of them! The hardest part is finding the feed point for the feedline. Here's a couple of links for easy designs and calculators. www.alpharubicon.com/elect/jpolejaden.htm and www.hamuniverse.com/jpole.html
I'm somewhat chicken when it comes to this stuff, but I actually had fun doing it. BTW, I live in South GA now, but I'm originally form OR, (Eugene, one of about 15 conservatives that lived there :-)) at some point in life when finances allow, I'd like to move back. Port Orford and Humbug Mt on the south coast is my favorite place in the world! See you later, Paul/N7SDQ (kept my "7" here in 4 land!)

Paul,
Thank you for posting those links, I will check them out. Sounds like it would be a fun to build and learn more about. I'll add it to my list of radio projects I want tackle eventually.

I can see I'll never get bored with this hobby!