This guy always looks like he's been over-exposed to the sun -apparently he IS a sun lover- but recently his life story has been exposed in a new movie. Here is part of an interview with CNN: 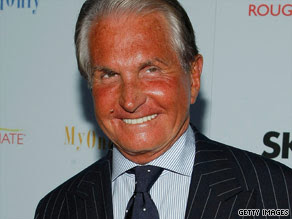 George Hamilton puts his life out in the open

[...] "My One and Only" has the style of a film produced during Hollywood's golden age, but the tale is easily relatable to today. In the film, Hamilton's mother, Anne, played by Academy Award winner Renee Zellweger, walks in on her bandleader husband and another woman. She hits the road in a brand new Cadillac Coupe de Ville with her two sons, George and Robbie, en route to find a new husband and a new life.

Hamilton, 70, spoke with CNN about the film, old Hollywood and his mother. The following is an edited version of the interview.

CNN: There is a lot of heartache in this story. Why did you want to share it?

George Hamilton: I don't know that I really did want to share it. It's a fictional story based on a real story loosely about me. And I went to the movie to hate it.

And I looked at the movie and I thought, my God, [Zellweger] looks nothing like my mother, but she was able to portray the emotions just the way it was then. I couldn't speak. I was completely overwhelmed by what Renee did. That's a great actress. [...]

Read the whole thing to find out more about the story of his life. I'm going to excerpt one more part, about what he said about "Old Hollywood":

Hamilton: Well, it was mythological. It was a place [that] the first day, I saw Robert Mitchum sitting at a table and he looked at me and said, "I know they say I don't know my lines. It's not true. I'm just too drunk to say them." And I thought, oh, that's an interesting man. Next Fred Astaire walks by, "Hello," and I stopped: "Hello, Mr. Astaire" -- God I love that guy -- and I see Cary Grant sitting down. And he said, "You've got a nice suntan. Do you like the sun?" I said "Well, yeah, I love the sun." ... He was so incredible.

And I saw Gary Cooper, Ty Power, Clark Gable, and then they disappeared. You talk about "Gone With the Wind," Hollywood disappeared! And I had envisioned this because I was the last of the contract players, and I wanted to be like them, but they were gone!

And all the sudden I'm seeing Marlon Brandos, and Monty Clifts, and then a whole generation of soft young men, the Beat Generation or whatever. I couldn't relate to them then. Because I had related to what my mother and brother had seen years before. And that's all I ever wanted to be.

CNN: There can never be another old Hollywood.

Hamilton: No, but there can be older people in Hollywood, and that's where I am now. Just before death they turn you into an icon. And the other day I got a star on Hollywood Boulevard and I thought, God this is pretty good, and then it scared me because I thought, they give these things to you before it's all over. [...]

Becoming a Hollywood Icon... as a death sentence! He's got a pretty amusing way of looking at things. And some interesting memories. Sounds like the movie could be a good story.