After the Repairs: The New Hubble Photographs 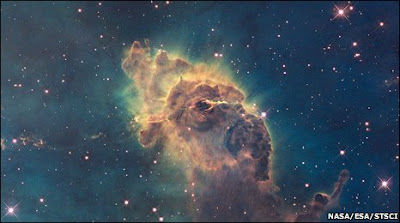 Astronomers are celebrating the release of remarkable new images from the Hubble Space Telescope (HST).

They prove the mission carried out by astronauts in May to service the observatory was an outstanding success.

The latest pictures include trademark Hubble visions - from colliding galaxies to dying stars.

Nasa says the orbiting telescope, regarded as one of the most important scientific tools ever built, should keep working until at least 2014.

The Atlantis shuttle mission in May was the fifth and final Hubble makeover.

The US space agency and its international partners plan now to concentrate their efforts on preparing a bigger and more capable observatory known as the James Webb Space Telescope (JWST).

Wednesday's release of pictures was the usual tour de force that astronomers have come to expect following a Hubble servicing. [...]

To see more photos, follow the above link, and then click on the link below the Butterfly Nebula to see a larger image of that. From there you will be able to view a selection of recent photos.