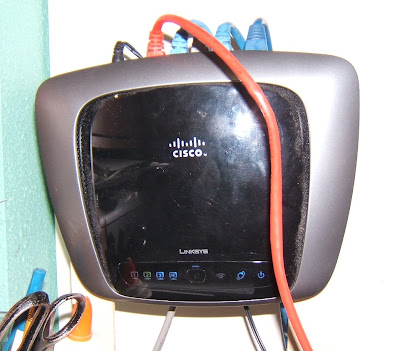 Seems like it. When we got the Linksys/Cisco WRT320N router several months ago, it worked fine. Then the weather got warmer, and the wireless connections began to slow down a lot, and even drop off.

I found out from reviews on Amazon.com that the unit had problems with overheating, and that wall mounting it could allow more heat to escape. So I mounted it, but no improvement. Some people said upgrading the firmware fixed it, so I did that; still no improvement.

It's still under warranty, so I'm thinking about returning it for another unit. Some people in the reviews did that, but said they got an even more useless unit sent to them. They also didn't have much good to say about Linksys customer support, so I've not wanted to go that route.

There is a fix I haven't tried yet, where the firmware for the device is replaced with open source software, called DD-WRT. I would have to "flash-burn" the software to the device, and if I don't do it right, it could turn the router into a brick. Need I say, it would also void the warranty?

There are two reviewers on Amazon.com who tried the DD-WRT software with this model. One said it worked, the other said it made no difference. So who knows if it would work for me?

Another reviewer said he gave up on the WRT320N, and bought a "Buffalo Router" instead, and has had no problems since. I never heard of the "Buffalo" brand, so I looked it up on Amazon, and the basic model looks pretty good. The more advanced model, with similar tech specs to the WRT320N, also looks good.

I'm very tempted to go with the new one. I just HATE trouble-shooting junk, and the WRT320N has already taken up hours and hours of my time, and may take up many more if I keep trying to work with it, and then STILL might not work. Sometimes it's smarter to just give up and go with something else. My time is worth a lot to me. And I'd like to end the aggravation.

Update 10-03-10:
The one reviewer who said that the DD-WRT software made no difference, made further comments below the review, where he said it DID improve things, he just needed to make some changes in the settings:

I gradually increased the MTU and now it's stable. Perhaps specifying 1500 instead of selecting "Auto" fixed something.

Anyway, I threw on DD-WRT firmware since I really didn't have much to loose. The router is working great now. Another thing I did was with DD-WRT firmware, I lowered the wireless transmit power from 70 mW to 32 mW. The less power, the less heat put out. I don't think these things do good with heat.


UPDATE: 10-05-10
Ok, I did the flashburn with DD-WRT software, as described on a wiki page here. Those instructions also involve putting a static IP address (temporarily) on the computer you are doing it with. Instructions on how to do that are here.

After I did the initial flash, I then upgraded it to the latest stable DD-WRT version (dd-wrt.v24-14896_NEWD-2_K2.6_big.bin) instruction on that is here.

So did it work? In short... YES! The DD-WRT firmware is much more comprehensive in it's abilities, more tools and options to work with. The wireless signal is stronger now. But I am having trouble: All the indicators show the signal is strong and stable, but the loading speed of web pages by wireless is still slower than it should be. Too slow. However, if I don't use ANY security settings, it's fast and fine. So what gives?

I've read that, with a wireless N router, I should be using WPA2 authentication with AES encryption (see Wireless-N Configuration). So it looks like I have to upgrade my network security settings.

In the meantime, I'm running it as a wireless G network, which is adequate. The router itself now has an amber light permanently on above the front WPS button. I've not read about that happening for anyone else, but it doesn't seem to be a problem. I've got my wireless network WORKING again. Hooray!!!

Now I'll see about tweaking it to improve the speed and the security. Some further information links about using the WRT320n router with the DD-WRT software/firmware are here:

Peacock Thread-FAQ: EVERYTHING you NEED to know! Really!!

I've cabled my computers together, behind a hardware firewall. You cannot peak at me.

And my net is fast.

Drill, cable, tool. And you can drop a hub anywhere you choose.
.