They used to call it "Fascism"

But now, it's somehow OK? Because Democrats are doing it?

The New American Corporate State
A troika of big government, big business and big labor is attempting to run the country to its own advantage.


Opponents of President Barack Obama and the Nancy Pelosi Congress will often accuse them of being "socialist." I find that this term is unhelpful, as many folks use direct government takeover of industrial enterprises as the litmus test for socialism, and thus will reject this hypothesis about the president. It is more useful to think of this administration as pursuing a European-style corporate state, a form of political economy that allows the state to exert strong control in the economy while maintaining a nominal façade of private ownership.

While the intellectual origins of the corporate state go back much further, the first serious attempt to implement such a system was in 1920s Italy by Benito Mussolini. Under that system, state-sponsored industry cartels programmed every aspect of economic life, from wages and working conditions to prices, production levels and product specifications. Nearly every commercial action required a government license, which would be denied to those who showed insufficient loyalty to the state and its goals.

In their current form, European corporate states tend to be more informal than their predecessors, drawing on mutually supporting networks of labor, industry and government leaders without the explicit structure of Mussolini's cartels or Roosevelt's code authorities. These networks are driven by an implicit deal by each of the three groups to protect their mutual interests and to recognize specific obligations.

In this three-way arrangement, unionized workers in key industries get high wages, guaranteed employment, rich pension systems and government protection from competition from younger and foreign workers. In return, they promise labor peace (barring the occasional strike to demonstrate their power) and tremendous election-day muscle.

Favored businesses (and by these we are talking about the top 20 to 30 largest banks and corporations in a particular country) get protection from competition, both upstart domestic entrepreneurs as well as any foreign rivals. In return, they provide monetary and political support for politicians' pet projects--from recycling to windmills--with the understanding that politicians will give them legislative back doors to recover the costs of these programs from customers or taxpayers.

In return for granting this largess to selected corporations and unions, government officials get to remain in power. Typically this arrangement appeals to parties on both the left and the right, such that the nominal ruling party may change but the core group in power remain the same.

The losers in all of this are ... everyone else. In effect this corporate system is just another age-old, historically time-worn effort to cement the power of a small group of elites. Entrepreneurship and innovation are often impossible, as incumbent businesses can call on tremendous state powers to stifle competitive threats. The unemployment rates of the young and unskilled can be astronomical, even in rich nations like Germany and France, as older unionized workers have worked to calcify labor markets to their own advantage. In the end, consumers and taxpayers pay for the whole system in the form of reduced growth and economic output, higher prices, higher taxes and less mobility for those not already in power. [...]

I see the same thing happening here. The article goes on to show the how and why of it.

It's not as direct or oppressive as Hitler's or Mussolini's type of fascism, though it does embody many of the same elements. Some would argue that the European Model is more flexible, and therefore more benevolent. Ironic then, that even the Europeans are now are cutting taxes, and urging the US to do the same. But their pleas are falling on deaf ears, as the Democrats seem hell-bent on moving us to the European Model. Or perhaps even something much worse. 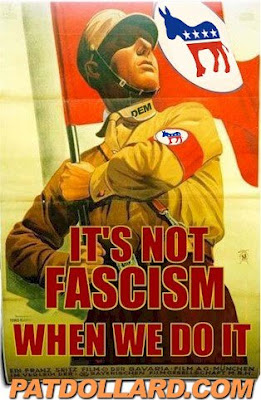