Can someone be accidentally buried alive, even after rigor mortis has set in?

The answer would seem to be "yes": 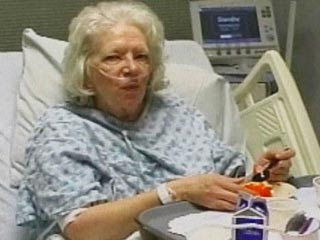 Thomas, who lives in West Virginia, is being called a medical miracle after she suffered two heart attacks and had no brain waves for more than 17 hours; reports NewsNet5.com.

Thomas’ heart stopped around 1:30 a.m. Saturday and doctors said she had no pulse. Rigor mortis started to set in, and she was placed on a respiratory machine.

“Her skin had already started to harden and her fingers curled,” Thomas’ son, Jim, told NewsNet5.com. “Death had set in.”

Thomas, 59, was rushed to a West Virginia hospital, where she was put on a special machine to induce hypothermia. This would allow her body to cool down for 24 hours before they would warm her up again, doctors explained.

However, Thomas’ heart stopped again after the procedure.

Her family said their goodbyes and Thomas’ tubes were removed, but she remained hooked on a ventilator as the possibility of organ donation was discussed.

However, Thomas woke up 10 minutes later and started talking.

I don't know which is worse; them thinking she's dead when she's not, or them wanting to harvest her organs while she's still alive.

I remember when an uncle of mine died in the state of Maine, state law said the body could not be buried for three days. At the time I thought, "There must be a reason for that". Well, now I know why!

There is a VERY informative article on the topic at snopes.com:

Just dying to get out

Snopes doesn't let you copy excerpts, so you'll just have to follow the link. Some very horrific, but even some very funny, stories on the subject. And did you know that even now, some people want to be buried with their cell phones, "just in case?".

Golly, how do you test your cell phone reception for six feet under ground? I'm sure that's one that the "Can you hear me now?" guy hasn't tested.

Well, I guess now you know what the conversation is like around our dinner table sometimes! Pat's been complaining that my posts about impending financial Armageddon are too depressing, and suggested that I should post about something more cheerful, like this, so here ya go. ;-)