Our smoke detectors are over 10 years old now, and should be replaced. One of them has been "chirping" in the early hours of the morning, when the temperature gets cold, which led me to investigate why. So I've ordered two of these as replacements: 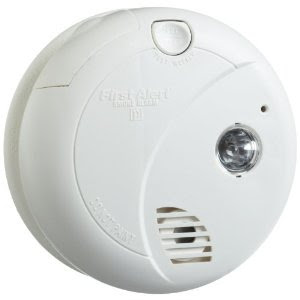 [...] The SA720CN alarm uses photoelectric sensing technology, which is generally more sensitive than commonly used ionization technology, to detect large smoke particles. Large smoke particles tend to be produced in greater amounts by slow-to-burn fires (often caused by cigarettes burning in couches or bedding), which may smolder for hours before bursting into flame.

As easy to operate as it is effective, the SA720CN boasts patented OptiPath technology, which provides 360-degrees of direct access to the smoke sensor. Additionally, a mute button quickly silences false alarms for up to 15 minutes and also doubles as an alarm test button. [...]

Most of the smoke detectors nowadays have both photoelectric and ionization technology. But I bought this one, which only uses photoelectric, because of this customer comment:

Ionization detectors DO NOT WORK

Folks,
Ionization detectors DO NOT protect you. The results and test methods are false due to the fire industy's cozy relationship with smoke detector manufacturers (yes, direct kick backs, look it up) and money for lobbyists in Sacramento and Washington DC. The profit margin on ionization detectors is much higher than photoelectric. Only photoelectric (required in commercial buildings - why not residential?) WORK. 75% of ionization detectors did not sound AT ALL in smoke filled rooms lethal to humans and have failed repeated independent tests.

I'm a 20 year veteran of the fire service and a paramedic. I can guarantee you will DIE from smoke inhalation before an ionization alarm EVER goes off. No one dies from being burnt, you die from asphyxiation due to smoke and poisonous gases. Read this and only buy photoelectric. There's too much information for me to go into it here. Be sure and follow the World Safety Fire Foundation link. If that doesn't convince you to go photoelectric you're playing with death. Email [...] and if you send a SASE I will send you a dvd proving much of these assertions to you. It includes a show from Canadian TV that is ILLEGAL to show in the US as well as other information. BE SAFE! My dept's Chief's message is below:
BD

Chief's Message
Warning: Your smoke alarm may not detect smoke

Currently, there is great confusion regarding the topic of smoke alarms. There are two types of smoke alarms used to protect residents in the event of a fire; photoelectric and ionization smoke alarms- both respond differently to smoke and flame.

Ionization smoke alarms react poorly to deadly smoke but faster to flames while photoelectric alarms react much faster to smoke. Ionization alarms are present in over 95% of homes in America and have a high failure rate when it comes to detecting smoke. The problem is, most deadly fires are smoldering fires and not fast flaming fires. By now, most people understand it is deadly smoke and heat that kills you before the flames even reach you. Ionization alarms should be labeled flame alarms and not smoke alarms.

An example of a fast flaming fire would be a Christmas tree fire, which certainly have claimed their share of resident's lives, but nowhere near the number of lives claimed by smoldering fires. Other fast flaming fires would be kitchen fires, which are the leading cause of residential fires, but rarely do they claim lives. I implore you to watch the following videos and audio clips: video 1, video 2, video 3, video 4 (University of Cincinnati presentation), audio clip 1.

Arguably, a greater problem with the ionization alarm is the number of false alarms it renders, thus leading to residents disconnecting the alarm all together. I must include an interesting story - a couple of years ago, with my infinite knowledge, I installed a combination ionization/photoelectric smoke alarm in my living room. Because my home is not large, the house is heated by a wood burning stove. After numerous false alarms (initiated by the invisible smoke) started by my stove, I gave up using the hush button (as it did not silence long enough) and disconnected the battery and remained disconnected until I went to bed.

Finally after one season, I placed the combination alarm in my bedroom (replacing the older alarm) and placed a new photoelectric alarm in my living room. Do I need to tell you the results? Not one false alarm. So my point is, how many residents (worldwide) give up and just permanently disconnect the ionization alarm and expose themselves to a potential lethal smoldering fire? Moreover, there have been many fire deaths worldwide with working ionization smoke alarms present but failed to detect smoke. Regrettably, the fire industry has yet to take an official stand to eliminate ionization smoke alarms once and for all.

P.S. I urge you to immediately replace your current ionization smoke alarms that do not detect smoke, with photoelectric smoke alarms, and for more extensive information please visit [...]. If you have any additional questions or need assistance I welcome your phone call at [...].

I've read that ionization detection is supposed to be good for detecting flash fires, like Christmas trees and waste paper baskets, that flare up suddenly with lots of flame an little smoke. The ionization supposedly detects invisible particles that these kinds of fires generate.

Perhaps they do. Unfortunately, they also detect dinner cooking, steam from the shower, your wood stove working normally, etc. The result can be too many false alarms.

I'm one of those people who pulls the battery out when the alarm goes off too often. So IMO, it stands to reason that, a properly sensitized smoke detector with the battery in it is going to be more effective than an overly sensitive one with the battery removed. So I've opted for the photoelectric ONLY model (Actually it's also the only one like it that I saw on Amazon.com; the rest all seem to be "duel" technology).

So that's how I came to make that choice. And just in case, we have another back-up system, too... DOGS.

Great work Chas
Your readers will be stunned at the content of the letter just sent to the Californian State Fire Marshal's Smoke Alarm Task Force - it gives a comprehensive overview of why almost every one of your readers are NOT safe.
www.theWFSF.org/legislation2

Not sure if anyone mentioned this or not as I didn't read all the comments. Nor do i plan too.

If you have a First Alert smoke detector that is randomly chirping and you replaced the battery with a fresh one. It needs to be replaced. Look on the back of the detector, on the label it will explain what the chirps mean. I had to use a magnifying glass to read mine. My ionization smoke detector is 11 years old and will be replaced by a photo electronic / ionization / rapid heat sensing detector.

For my attic I plan on installing a mechanical alarm that has a heat sensitive fusible link. So if the temp gets above 170 deg F. it will pop and cause the bell to ring for 4 minutes. This device resembles the old fire bells and is very loud.

Any fire alarm properly installed is better than none. Ionisation and photoelectric types work on different principles. A combination of both after competent audit of the risk(Fire Dept.) may be best for a particular home. It is dis-informaion to say one type is not safe as a generalisation.

Some states require to have CO alarms that are hard-wired in or near each bedroom. Also, if the location of a smoke alarm is within20 feet of a kitchen or bathroom shower, that alarm must be a photoelectric.

I would like to know where, what kind, and price of mechanical alarm Mojavegreen is buying. thanks for any help