It really started getting interesting with the "Valentine's Day Flare": 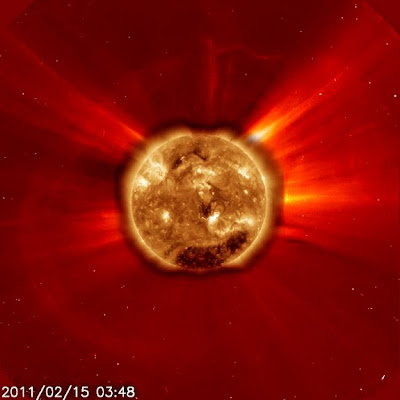 A whopper of a solar flare that fired up earlier this week is wreaking havoc on some radio communications on Earth, and could spark exceptional auroras soon.

The class X solar flare – the most powerful kind of solar flare – spewed from the sun Monday (Feb. 14), unleashing a massive wave of charged particles speeding toward Earth. Now the flare has triggered a geomagnetic storm in our planet's magnetic field that interrupted radio communications in China and could disrupt satellites and power grids as well, AFP reported.

Monday's class X flare was the most powerful solar eruption in four years. It came on the heels of a few less powerful flares in the days before. [...]

The article has an embedded link, with video footage of the flare occurring.

I had read elsewhere that the number of sunspots had rapidly doubled in the days leading up to this. And particles from the CME will be continuing to hit the earth.

The sun let loose its most powerful eruption in more than four years Monday night (Feb. 14), disrupting radio communications in China and generating concern around the world. But it could have been a lot worse, experts say.

Solar flares are intense bursts of radiation that send waves of photons streaming toward Earth. The scale measuring their strength has three general categories – Class C, Class M and Class X – with Class X flares being the most powerful.

Other storms, known as coronal mass ejections (CMEs), are large clouds of plasma and magnetic field that erupt from the sun's surface, sending lots of particles our way.

Both flares and CMEs have the same root cause — a disruption of the magnetic field in the sun's outer atmosphere. And both events can affect life here on Earth. Major flares, for example, can interfere with satellites, causing disruptions in GPS and high-frequency radio communications that can last from a few minutes to a few hours.

These impacts are felt almost immediately, since it only takes light about 8 minutes to travel from the sun to Earth.

"It's like the sun is a giant noise source," said Bob Rutledge, head of the forecast office at the National Oceanic and Atmospheric Administration's Space Weather Prediction Center. "It can disrupt anything that depends on a link between the ground and satellites."

But the most severe damage comes from powerful CMEs. The particles from these outbursts take longer to reach us — up to three days or so. But when they get here, their interaction with Earth's magnetic field can cause massive "geomagnetic storms," which have the potential to wreak long-lasting havoc on power and communications infrastructure around the globe.

But Earth has been walloped by monster solar storms before. One of the most powerful hit us in 1859, a blast that Rutledge estimates may have been 30 times more powerful than Monday's event, though it's tough to put hard numbers on such comparisons.

The 1859 storm shorted out telegraph wires, causing fires in North America and Europe, and spawned spectacular auroras — the light shows visible near Earth's poles — bright enough to read by, according to some accounts.

If the 1859 storm occured these days, it would likely have devastating impacts, since our electrical and communications infrastructures are so much more developed. A recent report by the U.S National Academy of Sciences found that such a severe storm could cause up to $2 trillion in initial damages by crippling communications on Earth and fueling chaos around the world.

It might take up to 10 years for authorities to re-assert control and get everyting fixed, the report concluded. For comparison, Hurricane Katrina likely inflicted somewhere between $80 billion and $125 billion in damage. [...]

I recently posted about a theory that solar flares affect people and stimulate political rebellions. The rapid increase in sunspots and the occurrence of these flares sure is a coincidence with the rebellions in the Middle East.

And I have posted previously about the hazards of solar storms to our technology (see links below). In the past few decades we have added thousands of communication satellites, and adopted widespread use of new technologies (like GPS) that are very sensitive to solar weather. A storm that previously we would have considered not so big or dangerous, might now present more concerns than it used to. Some precautions are being taken, by hardening the electrical grid, but has enough been done? Let's hope we don't have to find out the hard way.

Solar activity and it's disruption of GPS functions