The Commodore 64 goes Back to the Future

Add this to the "Everything old is new again" file. The old C64, which was an 8-bit machine with 64 kilobyts of memory, is back as a modern PC with a 64-bit processor and up to 4 gigabytes of memory:

[...] The new Commodore 64 is, like the old 64, an entire system inside a (rather thick) keyboard. The old Commodore 64 originally cost $595 and featured an MOS Technology 6510 microprocessor, an impressive 64KB of RAM, and VIC-II graphics that supported a screen resolution of 320 by 200 pixels.

The new system, which also starts at $595, is a little more modern: it's got a Dual Core 525 Atom processor, an Nvidia Ion2 graphics chipset, 2GB of RAM (upgradeable to 4GB), a 160GB hard drive, and built-in Wi-Fi. On the left side of the keyboard there's a slot or tray-load DVD (upgradeable to Blu-ray), and on the right side there's a multi-format card reader, along with a USB 2.0 port. The rear features four additional USB 2.0 ports; mouse and keyboard PS/2 ports; DVI, VGA, and HDMI ports; Ethernet; and support for 6-channel HD audio. It runs Linux, but you can install Windows if you like. [...] 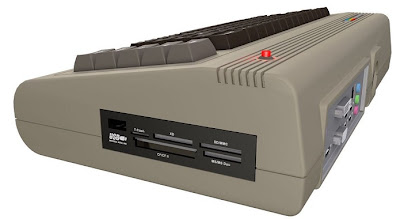 Neat! Way cool! You can see more about it here.

I have previously posted about the old C64, which I had used extensively in the 80's and 90's. I'm a sucker for nostalgia, so I suspect this new version with the old look is aimed at people like me.

The thing is though, that for the specs that it has, it's kinda pricey. For $595.00, you can buy a conventional laptop or desktop pc with more computing power than this has. But then, there is more to the new commodore than just hardware:

[...] Commodore USA, LLC was founded by Barry Altman in April of 2010, with the express purpose of reviving and re-establishing the famous Commodore computer brand. We are Commodore and AMIGA fanatics, just like many of you. We ask ourselves what could have been, and we are appalled by Apple revisionism. Commodore is back, and we're determined to bring the much loved brand back to the mainstream and restore its prominence in the tech industry to that which it richly deserves. It ain't over 'till we say so.

When Commodore went out of business, due to some bad management decisions, I often thought "What could have been?". They were way ahead of their competitors in some ways; the C64 computer was a multi-media computer before anyone even used the word multi-media. When Commodore closed it's doors, for me, a lot of the "magic" of computing went away with them:

[...] Commodore played a major role in the micro-computer era, which was a hot-bed of activity and innovation in technology. It was an era of distinctive platforms each with different capabilities and focus. Commodore's influence on the computing landscape was unparalleled, arguably even by the likes of Apple, Atari and IBM, their traditional rivals. When Commodore met its premature demise in the mid-nineties, we believe something of great value was lost in the tech world. Many Commodore fans and users were devastated, feeling that the magic had gone. Almost twenty years later there continues to be a huge cult following for the various generations of Commodore computers produced, with countless websites devoted to them, and thousands of enthusiasts who regularly meet at annual events all around the world. At Commodore USA, LLC we are striving to rekindle that magic that had left the world, to renew the fanbase, and to take the brand to new heights. To fight back against Apple revisionism. To start a new revolution. [...]

It seems as if they aren't just making a pc with a nostalgiac look. They want to bring Commodore back into the game as a major player. And part of their game plan is to offer a new Commodore OS. From their FAQ page:

10. What is Commodore OS?
Our new Commodore operating system, will be a unique Commodore and AMIGA centric Linux distribution, that will grow over time into something far greater. Commodore OS will not be your run of the mill Linux distribution. Every consideration will be given to retaining the look and feel of the classic Workbench environment, however there are limits to what is possible at this time, and we do not seek to re-invent the wheel. Our sights are set on creating an operating system environment competitive with the likes of those offered by Microsoft and Apple. An operating system that is inviting and accessible to new and old Commodore owners featuring modern day paradigms. With the inclusion of a plethora of the best open source games and applications, we intend to champion the open source movement and show the world what open source is capable of.

Yay! I'm enthused about that! I started tinkering with Linux around 1997, looking for some of that "magic", the fun, that got lost when switching over to PC's using Windows. I've found some of it, even more as Linux has continued to evolve. But now, we are going to have a new PC compatible Commodore brand that can run any operating system that can run on a conventional PC, AND have it's own branded Linux that it will be promoting. How good is that?

Pretty good, I'd say. BUT, one could still buy a laptop with better hardware specs, and install Linux on it oneself. So the reasons for going with the Commodore might be part nostalgia, and part wanting to support their effort to get back in the game with their own Linux OS. And if they start selling a lot of them, the price might come down, more in line with other hardware.

As of today, they are shipping the computer with Ubuntu Linux, because the Commodore OS isn't quite ready yet. People who buy the C64 now are promised they will be sent a disk with the new OS as soon as it is ready. Hmmm.

It will be interesting to see if they succeed. I've got this computer on my Wish List, but I'm not ready to press the "buy" button just yet. I think I may wait and see what happens with other people first. But I hope they succeed.

They also have a line of other computers as well, new Amiga's and computers like this new VIC-Pro:

It has higher specs than the C64. It looks like the kind of machine I expect the old Commodore company would have been offering now, if they had stayed in business. It's almost like, what could have been... now is.

They are offer a whole line of computers, which they will be expanding, too. 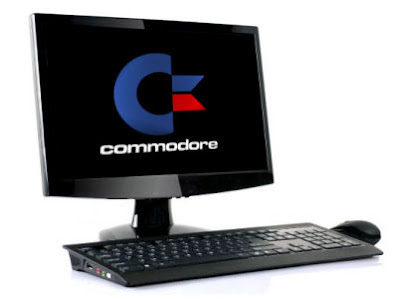 I will be watching with great interest, poised to push the "buy" button.

The Commodore 64 is back, and it leaves the 1982 version in the dust

I like it, but only to a degree. Max Headroom, an iconic show, was produced using Amigas and incorporated what were at the time some amazing effects. On the other hand, those "computer in a keyboard" are a bitch when something goes wrong. The hard drive will crash; good luck replacing it. I'd be more impressed if they went with ssd (solid state drives), but even then...call me crazy, but I like a box with some decent working room.

Yes, I like "working room" as well. Room to expand, and use off-the-shelf parts.

The keyboard-in-the-computer is a bit like a laptop without a screen.

But these machines do have an option to use an external keyboard too. And they have an HDMI port, which means you can plug it into your HDTV and use it for a computer screen.

They probably have at least a niche market, among older people who remember the Commodore, and who now have money to spend on things like this.

Will it be enough to re-launch the Commodore brand? Will they then expand into more spacious and cost competitive machines? Perhaps.