Can a Warp Drive really "fly"? 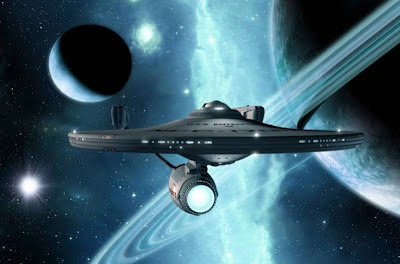 
[...] According to Einstein's theory of special relativity, an object with mass cannot go as fast or faster than the speed of light. However, some scientists believe that a loophole in this theory will someday allow humans to travel light-years in a matter of days.

In current FTL theories, it's not the ship that's moving — space itself moves. It's established that space is flexible; in fact, space has been steadily expanding since the Big Bang.

By distorting the space around the ship instead of accelerating the ship itself, these theoretical warp drives would never break Einstein's special relativity rules. The ship itself is never going faster than light with respect to the space immediately around it.

The difference between the two is the way in which space is manipulated. With a warp drive, space in front of the vessel is contracted while space behind it is expanded, creating a sort of wave that brings the vessel to its destination.

With a wormhole, the ship (or perhaps an exterior mechanism) would create a tunnel through spacetime, with a targeted entrance and exit. The ship would enter the wormhole at sublight speeds and reappear in a different location many light-years away.

In his paper, Davis describes a wormhole entrance as "a sphere that contained the mirror image of a whole other universe or remote region within our universe, incredibly shrunken and distorted." [...]

It goes on to describe a theoretical device called a "Ford-Svaiter mirror", and how it would work to create this "wave". Fascinating stuff.

As well, loop quantum gravity appears to indicate that black holes do not end in a singularity, but instead serve as funnels that spew information from one are of the universe to another - or possibly to other universes entirely. What this would mean is that entering a black hole would not subject you and your ship to spaghettification, but would serve as a portal from this point to another.
http://www.newscientist.com/article/dn23611-quantum-gravity-takes-singularity-out-of-black-holes.html#.UdnofOecySo

The problem with that is that you might not know where you're going to come out.

I remember a science-fiction novel (series) about the Heechee (a long-lost, incredibly advanced race), by Fred Pohl (RIP). The gimmick was that they left ships behind - when you got in one and pressed GO, you went - somewhere. Sometimes in the middle of an O-class star, sometimes in empty space, sometimes on a planet with lots of natural resources or technological goodies.

If you were in the last class, you got very rich.

Thanls for the New Scientist link. The whole thing is enough to make my head hurt.