A Chinese Fly from Hell 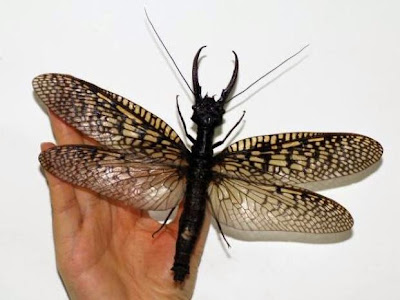 
Researchers in China have found what is clearly the most frightening looking insect ... ever.

What's being called the Giant Dobsonfly has an 8.3-inch wingspan and snake-like fangs.

It's not entirely clear how much force would have to be applied to kill the dobsonfly or what sound is made by the insect as it is squashed.

But, we're entirely sure that the sound upon discovering a dobsonfly is a loud shriek, scream or cry.

How long until this fly is found in the states?

It looks like something from the SyFy channel. It doesn't say that it can harm people, so perhaps it just looks scary? But what are those fangs for?

Apparently it lives in pristine water, and is very sensitive to water changes, even changes in PH. Follow the link, for video and more.

it has been found in the states