Does the former help the latter? A recent study suggests it does: 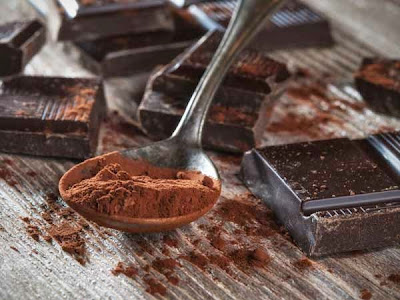 [...] In a small study, people with artery problems in their legs walked a little longer and farther right after eating a bar of dark chocolate, the researchers said.

Dark chocolate is rich in antioxidants called polyphenols. The researchers believe polyphenols improve blood flow to the legs by affecting biochemicals that prompt arteries to widen.

"Our body secretes chemicals that naturally dilate blood vessels in response to certain stimuli, improving the blood flow to certain areas," said Dr. Richard Chazal, vice president of the American College of Cardiology. "Some of the chemicals inside dark chocolate could affect the way these enzymes are metabolized in the body," suggested Chazal, who was not involved with the study.

The pilot study involved 20 people aged 60 to 78 who suffered from peripheral artery disease, a narrowing of the arteries that carry blood from the heart to the legs, stomach, arms and head. Reduced blood flow can cause pain, cramping or fatigue in the legs or hips while walking.

After eating dark chocolate, patients walked an average 11 percent farther and 15 percent longer than they did earlier in the day. That's about 39 feet farther and about 17 seconds longer, according to the study, published July 2 in the Journal of the American Heart Association.

The researchers found that levels of nitric oxide, a gas linked to improved blood flow, were higher after eating dark chocolate. They suggested that the higher nitric oxide levels may be responsible for widening peripheral arteries and improving the patients' ability to walk.

Both the results and the theory are "intriguing," said Dr. Mark Creager, director of the Vascular Center at Brigham and Women's Hospital and a professor at Harvard Medical School in Boston.

"The results are certainly interesting but modest, in terms of the walking distance improved," said Creager, who also serves as a spokesman for the American Heart Association. "With information such as this, one would anticipate these investigators will conduct a much larger trial with long-term treatment to confirm their observations."

Creager and Chazal noted that chocolate is also high in fat and sugar, and eating too much can contribute to health problems such as obesity, diabetes and high cholesterol.

"People need to be very aware of the fact that there are many substances in chocolate bars that could have an adverse effect on health," Creager said. "I would not recommend that people eat chocolate bars to improve their walking distance."

Chazal agreed, saying the study's true value lies in identifying the way that polyphenols might affect blood flow to the legs.

Polyphenols also can be found in foods with less added sugar and saturated fats, such as cloves, dried peppermint, celery seed, capers and hazelnuts. [...]

So more polyphenols may be the answer, rather than just dark chocolate specifically. The article went on to say more studies should be done to confirm these findings.