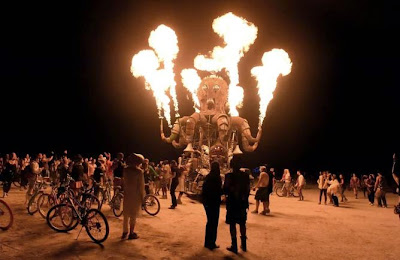 A Look Inside the Burning Man Festival

Burning Man, held in Nevada’s Black Rock Desert, is the largest outdoor arts festival in North America. It began August 25th and runs through Monday. Festival-goers attend from around the world to “dedicate themselves to the spirit of community, art, self-expression, and self-reliance,” say organizers. Last year, 68,000 people attended the sold-out festival, which is now in its 28th year.

‘‘In all my travels, Burning Man is utterly unique,’’ Destin Gerek, an 11-year veteran who teaches Burning Man workshops on the ‘‘intersection of sexuality and spirituality,’’ told the Associated Press. ‘‘Absolutely nothing compares.’’

I'd rather look at it on the internet, than actually be there. A gigantic Artsy Fartsy, Hippy Arts and Crafts festival. With sex, drugs and rock and roll too I'm sure. And plenty of spectacles.

If you go to the page, and follow the "Next" link at the end of the text on the first page (or arrows on the edge of the photo), it will start you on a slide show of about 25 photos, with text underneath describing what you are looking at.

There were some interesting things. The Temple of Grace was nice, both in the daytime, and lit up at night. A very detailed, classic design, looked kinda like something from India. At night, electric lights were used in lots of creative ways on many of the exhibits.

There are more links about the festival at the bottom of the first page.