A propulsion drive without fuel?

Yes, and it may take us to Mars:


An experimental engine is gaining acceptance among scientists, and could introduce a new era of space travel — it only had to break a law of physics to do so.

The picture, below, is of the EmDrive. It uses electricity to generate microwaves, which then bounce around in a closed space and generate thrust. The drive does not need propellant, an important part of current space-travel mechanics. 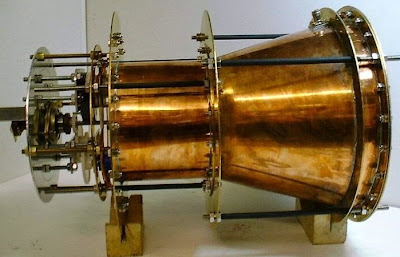 The force generated by the drive is not particularly strong, but the implications are big. Multiple independent experiments have now replicated the drive's ability to generate thrust, albeit with varying success. Using panels to convert solar energy into electricity and then into thrust, opens the door to perpetual space travel fueled by the stars.

Scientists were slow to warm up to the EmDrive since it violates the law of the conservation of momentum. In addition to not being sure why it works — current theories rely on quantum mechanics — scientists also have some pretty good ideas why it shouldn't work. [...]

Follow the link for pics, video and embedded links.