Is it the World's Most Tiny Doggie Ever? 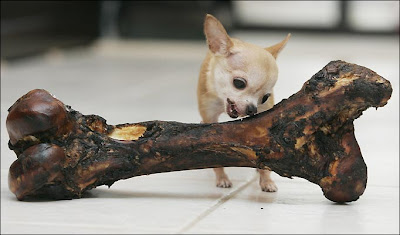 Mini mutt the smallest in world

IT’S gnaw joke for Brandy the smallest dog in the world as she tries to tackle a meaty bone bigger than her SIX-INCH long body.

The Chihuahua — who is just a fraction taller than a cola can — was named the world’s smallest hound by the Guinness Book of Records and has finished growing.

Four-year-old Brandy weighs only 2lbs and cannot even BARK as her lungs are too small. Owner Paulette Keller, of Largo, Florida, said: “When I saw her I just fell in love with her.”

Paulette, 53, whose pint-sized pooch has become a hit on US TV, added: “With a dog like this you have to be careful. She can’t even jump on or off anything because her legs are so tiny.”

We own two chihuahua mixes, a chihuahua pug, and a chihuahua dachshund. They are small, but this dog is so small it's scary. You would really have to watch out to make sure it doesn't get hurt.

See the link for another photo of her next to a coke can.