For some time I've wanted to get one of those emergency radios that have a hand crank to charge an internal battery, in case we ever have an extended power outage, or just to use in the yard. But which one to buy?

I had seen a selection at Radio Shack, but none of their crank radios offered shortwave. I wanted one that offered AM/FM, shortwave and NOAA (weather) channels, so I looked on-line at Amazon.com. There, I found this: 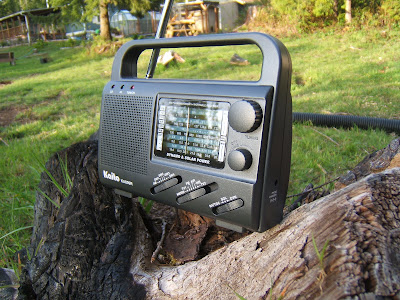 Product Description
Stay prepared and informed with the KA009R from KAITO. If the power goes out and batteries aren't available, the KA009 can function for up to an hour with only two minutes of hand cranking or an hour's exposure under direct sunlight Its built-in generator means that even in the most desperate situations, you'll still have access to local news and information--as well as to news from around the world.

This radio is a newly released and improved version of Kaito's widely acclaimed emergency radio KA009, it has all the nice features that a KA009 can offer, plus it comes with six different adapters for charging cell phones, so you can use the radio to power up your cell phone to make important phone calls when the battery is out.

It's the latest model in the KAxxx series, which have generally gotten pretty good reviews on Amazon.com. And not only does it get the channels I wanted, it also offers a solar panel on the back: 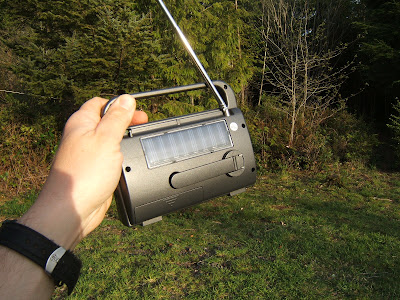 So even if the crank breaks or the internal rechargeable battery dies, I can still run the radio in bright sunlight. It can also take regular batteries and comes with an AC power cord too, so there are plenty of options to use. The AC cord recharges the internal battery, so you only need the hand crank for power outages. It also comes with a selection of cell-phone adapters, so you can use the crank to recharge your self phone.

The tuning is pretty good, the small speaker is remarkably good for it's size. I would have preferred more fine tuning controls for the shortwave bands, but even so, it pulls in shortwave stations better than my old dedicated shortwave radio that has fancier tuning controls. I'm impressed.

The price is also a bit cheaper than most of the others in it's class, yet it has more options. In my opinion, this one's a keeper.

No crank radio is going to sound as good as a more expensive portable stereo boom box. I think this radio is good, for what it is. If it's high fidelity you want, then you probably want something other than an emergency crank radio. I chose this one after reading many reviews of many different crank radios. Your experience may vary, depending on what radio reception is like in your area, and what your expectations are. Amazon has lots of buyer reviews to guide you. If you don't like this one, check out the others.

UPDATE, 02-02-09: I've been using the Kaito for a while now, as a portable to listen to when I'm doing work in the yard. I've noticed that the AM stations often bleed into each other, and can drift out of tune. FM fairs a bit better. The TV bands are about to become obsolete on the 17th, but that isn't the radio's fault.

One thing I don't like about this radio, is that there is no fine tuning knob. The battery and solar panel work fine. SW is always kind of scratchy, but it seems that every emergency crank radio I've read about says the same thing about the SW frequencies.

I've recently ordered another radio, the Eton FR250 Emergency Crank Radio. It has no solar panel, but it does have a fine tuning control. I will post a comparison of the two radios after I have used them both for a while.

I've thought about getting one of those myself (feeling slightly guilty about what I suspect are survivalist tendencies), BUT, I'm thinking, if I can't get batteries and I can't get electricity, I'm wondering who will be able to broadcast.

Short wave would be better or us parttime survivalists, I think!

Shortwave does have the advantage of letting you know what's happening, if for some reason all your local stations are rendered inoperable.

Parttime survivalists! LOL! I think I might be guilty of that too. I confess that I actually bought a sturdy metal box for $2.00 at a garage sale, thinking it would make a great Faraday Box to store my Radio in. That's what comes from reading up on EMP bombs, and watching too many episodes of "Jericho". ;-)

Okay I had to look up that Faraday thing but now that I know about it I'm thinking I better look around at some garage sales...