I heard it before I saw it. I had just let the ducks out of their pen, and was going to let the chickens out of their coop, when I heard it call. Some of the local blackbirds were also making noise, upset about it's presence. 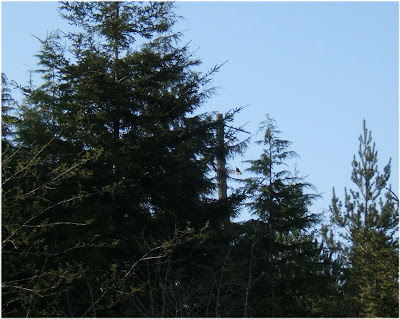 I thought it might be a Hawk, but a look through the binoculars, plus Pat and Andy's opinions, led us to conclude it was an Osprey. It was just sitting on the branch of a dead tree, in the morning sun. My camera does not have a powerful zoom. So I trod through the woods to get as close as I could. This was as close as I could get: 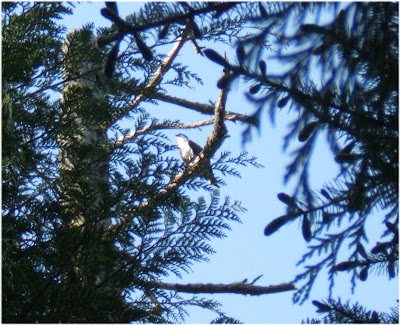 At that point it became aware of my presence, and flew off. I snapped a photo, but missed it, too many branches in the way. It was BIG, and glorious.

As I've said before, birds are hard to photograph. But it's ever so tempting to try.

Pat posted a photo on his blog of an osprey, which is more like what we saw through the binoculars.