Sounds good to me: 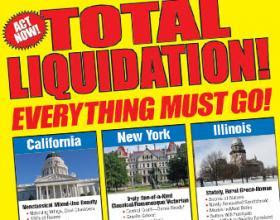 Give States a Way to Go Bankrupt

[...] In the decades since the constitutionality of municipal bankruptcy was affirmed by the Supreme Court, the most serious obstacle in practice has been the rule that only insolvent municipalities can file for bankruptcy. Because a struggling city theoretically can raise taxes or slash programs, it often isn’t clear if even the most bedraggled city needs to be in bankruptcy. In 1991, a court concluded that Bridgeport, Connecticut—which wasn’t anyone’s idea of a healthy city—had not demonstrated that it was insolvent, and rejected Bridgeport’s bankruptcy filing. To avoid this risk, without making bankruptcy too easy for states, Congress would do well to consider a somewhat softer entrance requirement if it enacts bankruptcy-for-states legislation. Current corporate bankruptcy does not require a showing of insolvency, and the new financial reforms allow regulators to take over large banks that are “in default or in danger of default.” Although these reforms are in other ways deeply flawed, the “in default or danger of default” standard would work well for states.

Given that a new bankruptcy chapter for states would clearly be constitutional, and the entrance hurdles could easily be adjusted, the ultimate question is whether its benefits would be great enough to justify the innovation. They would, although a bankruptcy chapter for states would not be nearly so smooth as an ordinary corporate reorganization. When a business files for bankruptcy, the threat to liquidate the company’s assets—that is, to simply sell everything in pieces and shut the business down—has the same effect on creditors that Samuel Johnson attributed to the hangman’s noose: It concentrates the mind wonderfully. Because creditors are likely to be worse off if the company is simply liquidated, they tend to be more flexible, and more willing to renegotiate what they are owed.

One can imagine something like a liquidation sale for cities and even states. Indeed, in the early 1990s, professors Michael McConnell and Randal Picker proposed that Congress amend the existing municipal bankruptcy chapter to allow just that. They argued that many of a city’s commercial, nongovernmental properties could be sold in a municipal bankruptcy, and the proceeds simply distributed to creditors. (They also suggested that municipal boundaries could be dissolved, with a bankrupt city being absorbed by the surrounding county.) Although California has taken small steps in this direction on its own—it recently contracted to sell the San Francisco Civic Center and other public buildings to a Texas investment company for $2.33 billion—it seems unlikely that Congress would give bankruptcy judges the power to compel sales in bankruptcy. Nor could it do so with respect to any property that serves a public purpose. Liquidation simply isn’t a realistic option for a city or state. (The same limitation applies to nation-states like Ireland and Greece, whose financial travails have reinvigorated debate about whether there should be a bankruptcy-like international framework for countries.)

With liquidation off the table, the effectiveness of state bankruptcy would depend a great deal on the state’s willingness to play hardball with its creditors. The principal candidates for restructuring in states like California or Illinois are the state’s bonds and its contracts with public employees. Ideally, bondholders would vote to approve a restructuring. But if they dug in their heels and resisted proposals to restructure their debt, a bankruptcy chapter for states should allow (as municipal bankruptcy already does) for a proposal to be “crammed down” over their objections under certain circumstances. This eliminates the hold-out problem—the refusal of a minority of bondholders to agree to the terms of a restructuring—that can foil efforts to restructure outside of bankruptcy.

Whether states like California or Illinois would fully take advantage of such powers is of course open to question. During his recent campaign, Governor-elect Jerry Brown promised to take a hard look at California’s out-of-control pension costs. But it is difficult to imagine Brown taking a tough stance with the unions. Even in his reincarnation as a sensible politician who has left his Governor Moonbeam days behind, Brown depends heavily on labor support. He doesn’t seem likely to bring the gravy train to an end, or even to slow it down much.

But as Voltaire warned, we mustn’t make the perfect the enemy of the good. The risk that politicians won’t make as much use of their bankruptcy options as they should does not mean that bankruptcy is a bad idea. For all its limitations, it would give a resolute state a new, more effective tool for paring down the state’s debts. And many a governor might find alluring the possibility of shifting blame for a new frugality onto a bankruptcy court that “made him do it” rather than take direct responsibility for tough choices.

This brings us back to the issue of federal bailouts. When taxpayer-funded bailouts are inserted into the equation, the case for a new bankruptcy chapter becomes overwhelming. And it’s a case for Congress to move now on the creation of a state bankruptcy law.

With the presidential election just two years away, the pressure to bail out California, Illinois, and perhaps other states is about to become irresistible. As we learned in 2008 and 2009, it is impossible to stop a bailout once the government decides to go this route. [...]

I think we NEED a state bankruptcy law. I don't see another viable alternative. Bailouts just increase debt without solving the problem.

It was hard to chose excerpts, it's worth reading the whole article. There are many examples given that back up what is being said.

Government Employee Unions are Ruining Us

Had a conversation with a fella who wanted to replace the current, privately-held utility with a public utility.

I asked him what the difference would mean to either him or to me. He pointed out that he believed the PUD would be able to produce electricity more cheaply, since there wouldn't be a profit motive.

Okay. But where are you going to find the funds to replace or repair equipment that wears out, or build more generating capacity?

Easy. Sell bonds! (Everything is so easy!)

But who, I asked, would buy the bonds? And what rate of return would a bondholder need to have offered, in order to entice his investing in your bond, rather than some other instrument of investment? And, if you're an unprofitable enterprise, what is your ability to finance your debtor obligations? And who is responsible for making the decisions of the PUD, the Board? An executive director? And, how much do you pay the Board, Exec, and the other administrative and other personel necessary to actually do the work needed to supply electricity to homes and businesses in your district? And aren't you simply trying to transfer all of that economic activity out of the private sector, in order to achieve a goal that might be praiseworthy--of sorts--but is actually just create liabilities for people who may not wish to have those liabilities placed on their backs? Why should I be responsible for your PUD? When, today, all I have to do is pay my utility bill, and I get electricity?

Social justice, was his answer. It isn't right that large corporations make profits on the backs of the little guy. I offered that it didn't seem right to burden the little guy with the liabilities of a public corporation, when that service is already being provided without that burden.

Well, the chickens are coming home to roost, and the states, in my opinion will not be able to use bankruptcy in order to avoid the oncoming financial disaster. So, who will be made to pay? The bondholders, or the public employees. Which group is evil, which group is good?
.

To an anti-capitalist, government is always the answer and always better than the private sector. I doubt any amount of reasoning or evidence could persuade them otherwise (see my demoralization post.)

As for bankruptcy for states, we need to get the new congress to push for it. The earlier part of the article I linked to, talks about how bankruptcy for municipalities became law in the 1930s. It's constitutionally correct, and it has laid the groundwork for extending it to states. While it's unlikely that states as entities would be liquidated (despite the amusing graphic), it could result in government employee union contracts being disbanded, and their pensions being renegotiated.

The only alternative I see is complete financial collapse and all the chaos that entails. The path we're on is unsustainable. Somethings gotta give. Bankruptcy looks to me to be the safest way to go.